The Caulfield Model Railway Exhibition is over for another year. This year marked the 40th anniversary of the exhibition run by the AMRA Victorian Branch. I went to the exhibition yesterday, flying down from Canberra, and had a great time.

There were 25 layouts out of 65 stands. The plethora of commercial stands at the one location made it very easy for shoppers to part with their money! Of most interest, were the Austrains Victorian Railways 4 wheelers (B, I, and IA) which sold out just after lunch on Saturday. I understand more packs were made available today from an express overnight shipment from Sydney. Austrains were also selling their newly arrived NR in Southern Spirit green and white livery.

A number of pilot models were on display at the Caulfield exhibition. Auscision had their forthcoming Victorian Railways GY 4 wheeler. Trainorama displayed their Commonwealth Railways GM and NSWR 48 class diesel locomotives. Elsewhere, the NSWR 48 class diesel (in four different versions) was on display from Powerline. Meanwhile, Eureka was also at the exhibition, fielding a number of inquiries about the continuing delays for the VR R and K class steam locos and the NSWR 40 class diesel. Ron Cunningham advised that Eureka were going to use a new manufacturer since they had been cut by Sandakan (Kader). However, I am not sure if the models previously announced have been cut by Sandakan or not. Perhaps Ron will explain more in due course on his website.

Of the layouts, the AMRA Victorian Branch were exhibiting their HO scale US prototype layout Wills Street for the last time. The layout was being offered for sale. The photo belows shows a BN&Q train heading through a rather deserted looking yard on Wills Street. 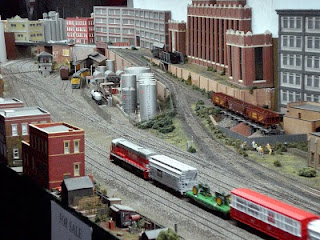 Another large US layout on display, and exhibited at the show last year, was from Glenn Brooks and the Latrobe Valley Model Railway Association featuring western railroad action based on the Union Pacific and Rio Grande. This layout was very impressive, both in terms of physical size and plenty of continuous train action.

The Coffs Harbour (NSW) Railway Modellers Group came all the way south of the border to display their large US-styled HO scale layout. The layout scenery and buildings are based on the US scene, but at different times during the day trains from the US, NSW and Victorian Railways all get a turn showing their wares around the layout under digital command control (DCC). The photo belows show US steam action with a long train of reefers. 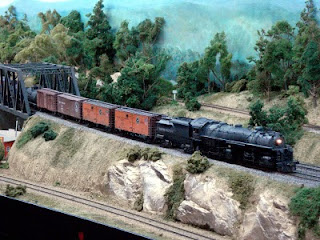 VR-based layouts in HO scale included Benalta, Broadford, Coliban Valley, End of the line, and Tyobic. I hadn't seen Tyobic before and it followed the tradition of a VR country through-station with a yard. The layout had a split backscene, like End of the line, that sent a train through to the fiddleyard through a gap in the backscene just passed a nicely modelled railway crossing. The next two photos illustrate Tyobic. 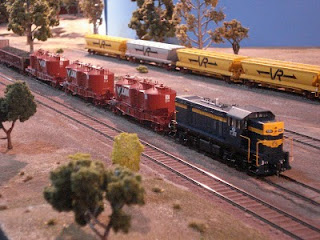 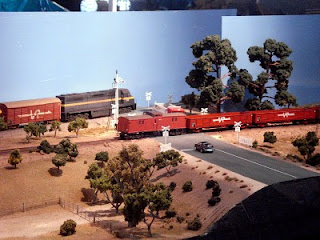 In N scale, layouts on show included Georgetown (UK), Springhill Yellow Pine Division (US), and Enoshima (Japanese). I think Enoshima was being displayed at Caulfield for the first time and certainly drew in the crowds. 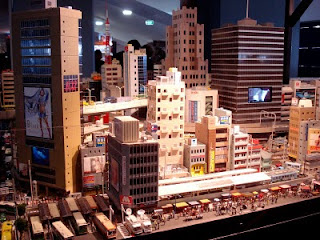 There were also two very different but very interesting layouts on display. The first, was the HO scale Howjadoit, that showed a small compact layout under different stages of construction. This display was a great demonstration of how a layout is constructed, something we need to show to the public more often. 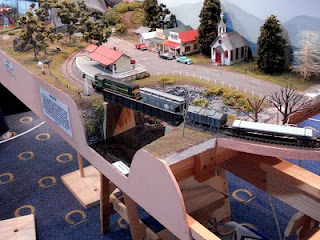 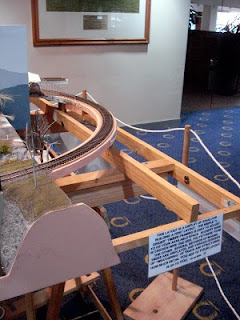 The second interesting layout was the Oe scale Pierreville. Pierreville depicts a French railroad station where narrow and standard gauge tracks meet to transfer passengers between the systems. A nice feature of the layout was the fernicular railroad at the front. And I was quite intrigued by the system of getting trains on and off the layout (see photo below). 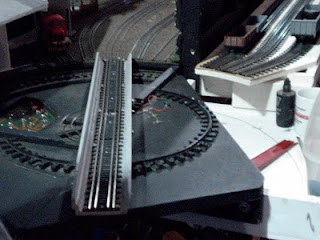 As well as enjoying the layouts and commercial stands, I caught up with several railway modellers that I know very well; most from Canberra or Sydney strangely enough. All in all, it was a great day out.
Posted by Brad H. at 19:35 No comments:

I had to go to Sydney today to sign some papers after getting a call last night from the real estate agent selling our Sydney home. Driving from Canberra to Sydney and back in a day (that's seven hours all up) isn't my idea of fun until I realised that the Beecroft Model Railway Exhibition was on this weekend. Amazingly enough, the M2 tollway exits onto Pennant Hills Road not far from where the exhibition was being held!

Not one to let opportunity pass one by, I managed to spend a couple of hours at the exhibition to make the trip to Sydney really well worth the effort.

The exhibition was held in a small hall on the corner of Copeland Street and busy Beecroft Road. I parked the car at the railway station car park and walked the short way to the hall. The hall was one of those special buildings trapped in a time warp from the past (i.e. my early childhood) but nevertheless functional for a small exhibition such as this. There was also a second-hand stall where I picked up a copy of Ron Preston's book on the 32 class for $40 - thank you very much!

I have included a sample photo of each of the layouts on display, minus a possible "Thomas" layout that I think was in a separate foyer off to the side of the main hall.

The first layout that greeted visitors upon entering the hall was the US-prototype layout Springfield in HO scale. I hadn't seen this layout before. The layout featured some nice kit-built industries and townscape while keeping the punters happy with plenty of train movement. The layout was operated using NCE DCC hand-held controllers. When not in use, the  controllers fit between the two knobs on the side of the layout as illustrated in the first photo (lower left). 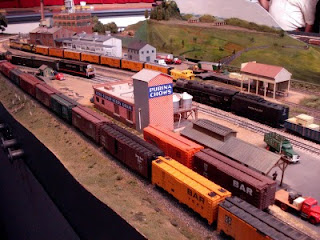 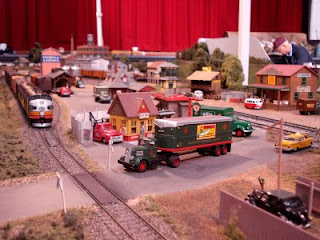 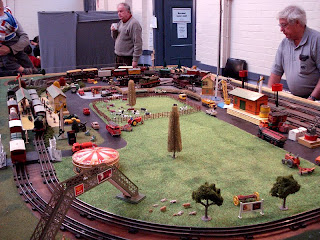 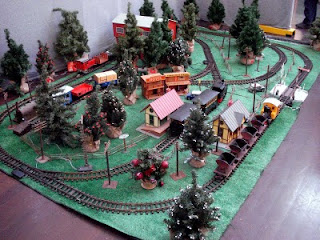 Moving around the hall counter-clockwise I caught up with Anton Bognar (Anton's Hobbies) who was displaying his HO scale European layout, Ochsenhausen. Next to him was the layout Back of Beyond featuring Australian N scale. 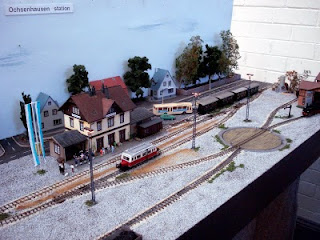 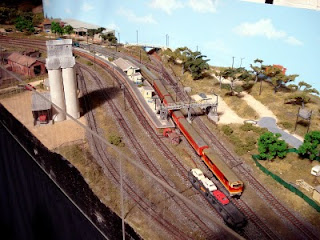 The next layout was Grischun, a Swiss standard and narrow gauge layout (HO scale) making its exhibition debut.Grishun was built by former Canberra-resident Greg C. and it was great to catch up with him there since we haven't chatted face-to-face for almost ten years! Grischun was up to Greg's usual fine standards and exhibition organisers should mark this layout as one to grab next time around! The scenery is terrific and there is enough train action on three different levels to keep everyone happy. Some nice HO standard gauge and HOn Bemo traction locomotives were particular highlights. 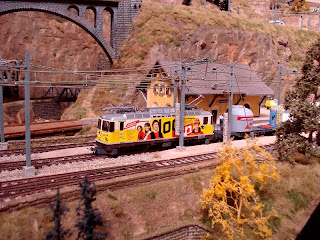 Next to Grischun was the well-crafted Mullet Creek layout in HO scale from Geoff Small. Mullet Creek shows some lovely waterway scenery based on the Hawkesbury River area north of Sydney. This layout also featured catenary and, like the prototype, always seems to get in the way when taking photos! 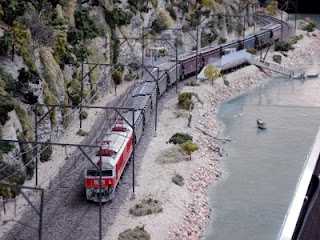 The simple Rydal Hill was next, demonstrating the virtues of a small layout when space is at a premium. The layout is a single line with a short dock at the rear of the station platform. The "banana" ends (illustrated in the second photo), brings the track on both sides of the scenic section around to the fiddleyard at the rear. I could easily imagine the scenic section at the front as a layout module connected to a small fiddleyard at the rear by these curved ends. 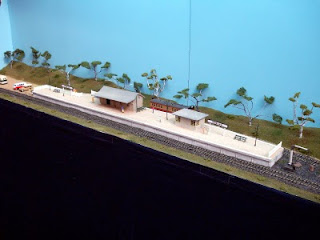 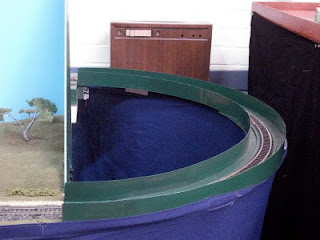 I had such an enjoyable time that I didn't notice that two hours had passed and we had to be on our way up the road to Hornsby and the real estate agents, stopping at MicroModels Hobbyland to pick up the fishbelly MLV produced by IDR castings (the last one in the shop folks!). Ian is casting some more of these MLV kits so make sure you get one this time around.

The drive home to Canberra was uneventful. I was so bored with the drive and keen to get home that I didn't even stop at Goulburn for the habitual scan of Goulburn railway yard and station. Nevertheless, the Beecroft Model Railway Exhibition gave the trip some entertaining focus and was well worth the look.
Posted by Brad H. at 23:11 1 comment:

The 38th Annual Malkara Model Railway & Scale Model Exhibition was held over this weekend at the Malkara special school in Garran, Canberra. The exhibition featured model railways, other scale modelling, and crafts as a major annual fundraiser for the school.

There were about fifteen model railway layouts on show, as well as examples of military modelling, woodturning, slot cars, radio control cars, and Victorian dollhouses. The number of layouts and displays seemed slightly smaller than in previous years but this didn't detract from the weekend.

For railway modellers, the weekend is just as much about meeting friends and enthusiasts as it is to watch the layouts. It was therefore great to catch up with so many people I know through the hobby; the local Canberra railway modellers, and the lads from Goulburn and Wagga Wagga. Runway 13, Pallas Hobbies, Model Railroad Craftsman, and Kerroby Models were the commercial stands in attendance.

Two new layouts on display included Wallerawang and Waterfall, both in HO scale. The Guildford Model Railway Club exhibited Wallerawang, showcasing a beautifully constructed station building based on the stone prototype. Waterfall was exhibited by the Illawarra Model Railway Association and featured some exquisite buildings, including the main station building and road bridge overpass. And whilst I'd seen the N scale Tarana before, it too was well worth some time watching the trains roll by.

Below: A couple of 82 class locos haul a coal train through Wallerawang 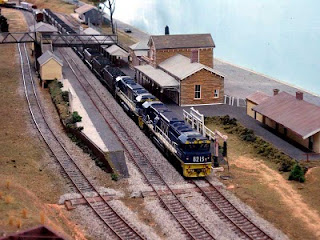 Other layouts on show included Campbelltown (HO scale), Crestwood (HO), AustTrak N scale, Duck Creek (HOn2.5), Jembaicumbene (HO), Kangaroo Valley (HO), Nicholls Siding (HO), and the Epping Model Railway Club's Brisbane Waters (HO). There was also quite a nice British layout in 00 scale, Southern Revisited, that featured the Southern Railways with a single track double looped layout only 1 metre wide by a couple of metres in length. For its size the layout was well presented, even if the shortest width curves were only 17.5" radius!

With perfect sunny Canberra weather, the weekend at Malkara was a great success.
Posted by Brad H. at 20:13 1 comment: