As I indicated in my previous post, I have a few photos to show from my trip to Adelaide for the Modelling the Railways of South Australia Convention.

The first two sets of photos show the two home layouts I managed to visit after the Convention. Both of these layouts featured (along with The Moping Branch layout) in the book "Recollections" by Kevin Kavanagh released last year at the Convention. The book gives a good insight into a handful of layouts owned and operated by like-minded individuals who have been part of the ABLO (Adelaide Branch Line Operators) group during the past forty years or so. The two layouts featured below still use a card operating system based on the ABLO method. The ABLO card system was featured in an article in the January 1977 issue of the Australian Model Railway Magazine (AMRM).

The first three photos shows the layout of Kev Kavanagh (not The Moping Branch Kev) that I was privileged to visit on the day after the Convention. The layout is the Huntingdale & Grange Railway. This layout was featured in the December 1997 issue of AMRM. 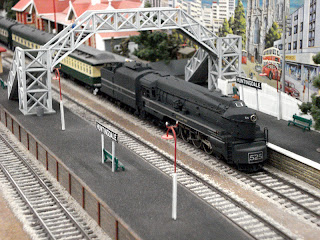 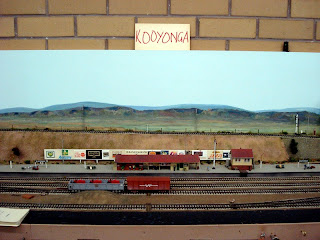 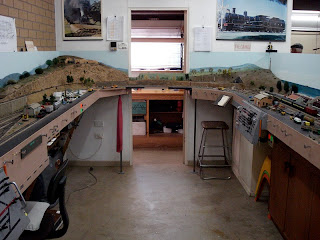 The next four photos shows the layout of Hugh Williams. This layout was moved in total from its former home in Belair to its new owner and new location - quite a move given the size of the layout and the complexity of the track plan. The layout runs around itself in three loops and each level is visible behind each other. As I said in the previous post, I did not find the visible layers distracting at all while I was operating my train. A description of the layout and a line diagram of the track plan are in the book "Recollections". 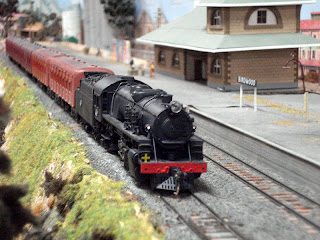 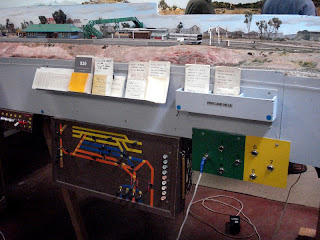 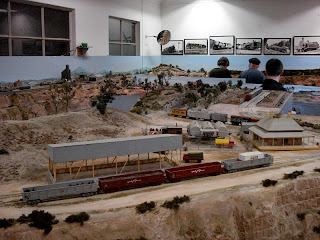 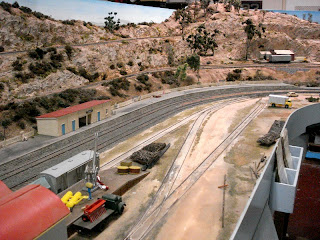 Finally, I have included a couple of photos from the National Railway Museum at Port Adelaide. The photos show, in order, a portrait of the front end of the SAR 930 class diesel; a shot of the Commonwealth Railways Budd car (that one is for Bob Stack), and the third photo is of a trio of LCL containers sitting in an open wagon (that's for Bob Gallagher). 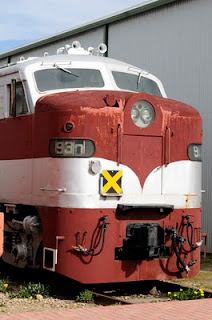 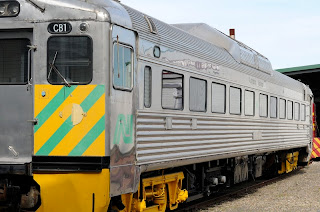 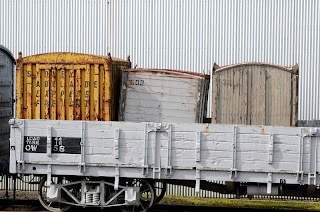 I have already pencilled in some time away next year for the Convention plus a couple of extra days for "sightseeing". Keep a lookout for the 2011 dates that will be advised on the Modelling the Railways of South Australia Convention website.
Posted by Brad H. at 21:12 2 comments:

Sorry for the delay in reporting back on the Modelling the Railways of South Australia Convention held a couple of weekends ago in Adelaide.

The 2010 Convention was really great this year. We had some first class presentations, including a wonderful photo presentation and explanation of the famous Moping Branch layout. The Moping Branch layout was featured in a couple of AMRM articles well over 20 years ago. A DVD of the layout was also on sale for $20 and I was one of the lucky ones to buy a copy before they sold out on the day!

The other featured presentations included:
In addition to the presentations, I managed to catch up with regular attendees from South Australia (Les Fordham, Paul Dolan, Peter Knife, and Greg), Melbourne (Kym and David), and Sydney (Bob, Ian, and Es). I also had a good chat with several others as well, including Don Bishop who did the presentation on the Moping Branch.

The 2010 Convention was the 15th and I have been going every year since 1998, missing only one Convention in that time. Once again, the annual Convention notes were a high quality product. I now have four thick volumes of truly exceptional historical articles and photographs dealing with both the South Australian Railways (SAR) and Commonwealth Railways (CR).

On the Sunday, the day after the Convention, I went to the National Rail Museum (formerly known as the Port Dock Railway Museum) at Port Adelaide. The Museum had a sale of railway memorabilia and train magazines in the morning. I bought a Working Timetable from the early 1970s.

Mid-morning saw me off to Kev Kavanagh's home to see his beautiful Huntingdale model railway. The layout is a two level point-to-point layout based on the SAR. When I download the photos from my camera I will put a couple up on the blog.

The afternoon saw me back at the National Railway Museum. I had a good look around, taking a few photos along the way. Bob Gallagher (former Managing Editor of AMRM) had asked me to track down and photograph a wooden LCL container at the Museum. Thankfully, I found it OK inside an SAR bogie open wagon with a couple of of the traditional steel LCL containers for company.

I took a couple of days leave this trip and on Monday (13th September) I drove up to Crystal Brook hoping to see plenty of train action. At Crystal Brook, some shunting was taking place at the grain silos; unfortunately using tractor power rather than loco power. As it turned out, the weather turned overcast so I didn't stay too long. I did see a Perth-Melbourne intermodal speed through Crystal Brook with a couple of QR locos on the front - a 6000 class and a LDP. I ended up getting a photo of the train at Snowtown. I returned to Adelaide via Clare before the weather really let loose with strong winds and a torrential downpour of rain.

That night I had been invited to an operating session of the Belair layout at the home of Hugh Williams. This layout was a multi-ringed layout featuring SAR and Victorian Railways (VR) prototypes. There were about seven operators on the layout, albeit I had a personal coach with me to help me run my timetabled set of trains (thanks, Steve). Photos to come shortly....

The two home layouts I visited, as was the Moping Branch, were multi-level and multi-track but without the double-deck configuration I mostly see in US model railroad magazines. All three layouts used a card operating system based on the system developed by the ABLO group from the 1960's-1970s. The three layouts looped at least twice and the multi-levels remained visible, even though each level was independent of each other in terms of the fictional geography of the layout. In that sense, they were similar in style to Bob Stack's South Coast Rail.

I didn't find the visible multi-levels at all distracting as I concentrated on running my individual trains around the layouts. I am now seriously looking at this option for my home layout since it gives the extra running length without taking up too much space and/or relying on space-hugging helixes to elevate tracks to the higher level.

This Saturday I will be attending the Modelling the Railways of South Australia Convention. I have been to several over the years and always have a great time. And the presentation notes are second to none!

I am actually flying down to Adelaide tomorrow morning for a work seminar. I will be then spending the next few days in Adelaide at the Convention on Saturday, visiiting the National Rail Museum and a couple of layouts on Sunday, and then looking for opportunities to take some photos of 1:1 rail action in the Adelaide environs after that. I might have a look around some of the Adelaide hobby shops as well, including Orient Express Model Railway Shop in suburban Unley where I want to check out the Zimo system of DCC.

I am really looking forward to the trip and will report back next week
Posted by Brad H. at 19:29 No comments: