The 2013 NMRA Australasia Region Convention is over for another year. The convention in Canberra was a huge success from what attendees were saying throughout the weekend. The Committee should be very satisfied with how the convention went and with the layout tours that were on offer. 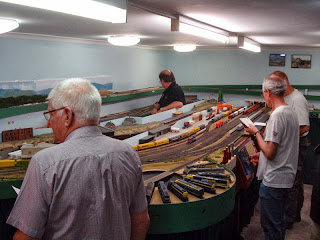 PHOTO: Rob A. hosted an operating session and an open house as part of the Convention. Rob's layout is based on a fictional NSW-Victorian railway line on the east coast of Australia between Eden (NSW) and North Geelong (VIC).

The facilities at the convention location were good; the clinics were well attended; the food was sufficient; the ladies' program was very much complimented; and the layout tours were interesting. The opportunity to visit the ARHS Canberra Division premises in Kingston on the Sunday afternoon and look over progress on the restoration of Beyer-Garratt 6029 was also very popular - details about the restoration of 6029 here.

The dinner at Ainslie Football Club was made even better by the outstanding after-dinner talk by local modeller Stephen H., who combined a wicked wit with a wonderful knowledge of history, the law, and railroading into a very entertaining presentation.

The convener of the Canberra Convention, Viv B., commented to me that there were two critical factors for the success of the convention: good planning and organisation in preparation for the event itself. The fact that there are several ex-military personnel on the Committee would no doubt have helped in that department.

Choosing a venue with good facilities and where clinics could be held without undue noise were paramount. The physical separation of the main hall, the classrooms where the clinics were held, and a good-sized area for vendors and for attendees to talk with each other really made everything work well together. Excellent signage helped direct people into the building and where to find all the rooms and amenities. Good parking was also provided at the event location. A good variety of interesting presentation topics with the provision of the necessary IT equipment were also important considerations. Interestingly, because of the physical separation of most of the areas, a public address system was not needed (even in the main hall). A good ladies' program was also important.

Overall Viv and the team should be congratulated for putting on a terrific NMRA Convention. Well done to all involved!

You don't have to be a member of the NMRA to come along. The Convention registration form can be downloaded from the Convention site. There are some great layouts to visit, including Kangaroo Valley; the layout of Stephe Jitts (his layout was featured in AMRM February 2012)

The organising committee has put together a great program of presentations and clinics that should be of interest to all model railroaders, no matter what prototype you follow. The presentations include the following:

I hope you can join us in Canberra on the weekend of 21-22 September for what looks to be a great weekend of model railroading.

Oh, and by the way, Floriade will be on at this time along with a host of other Canberra attractions including the Australian National Gallery, National Portrait Gallery, Australian War Museum, Botanic Gardens, and the new National Arboretum. And hopefully the warm weather we have enjoyed this week (20C+) will continue throughout the rest of September. So why not make a long weekend of it and enjoy the Convention and the local attractions too!
Posted by Brad H. at 22:38 No comments: