Just got my copy of Model Railroad Planning 2014 direct from Kalmbach Publishing. As usual, it is full of interesting articles and some excellent model railroad photography. 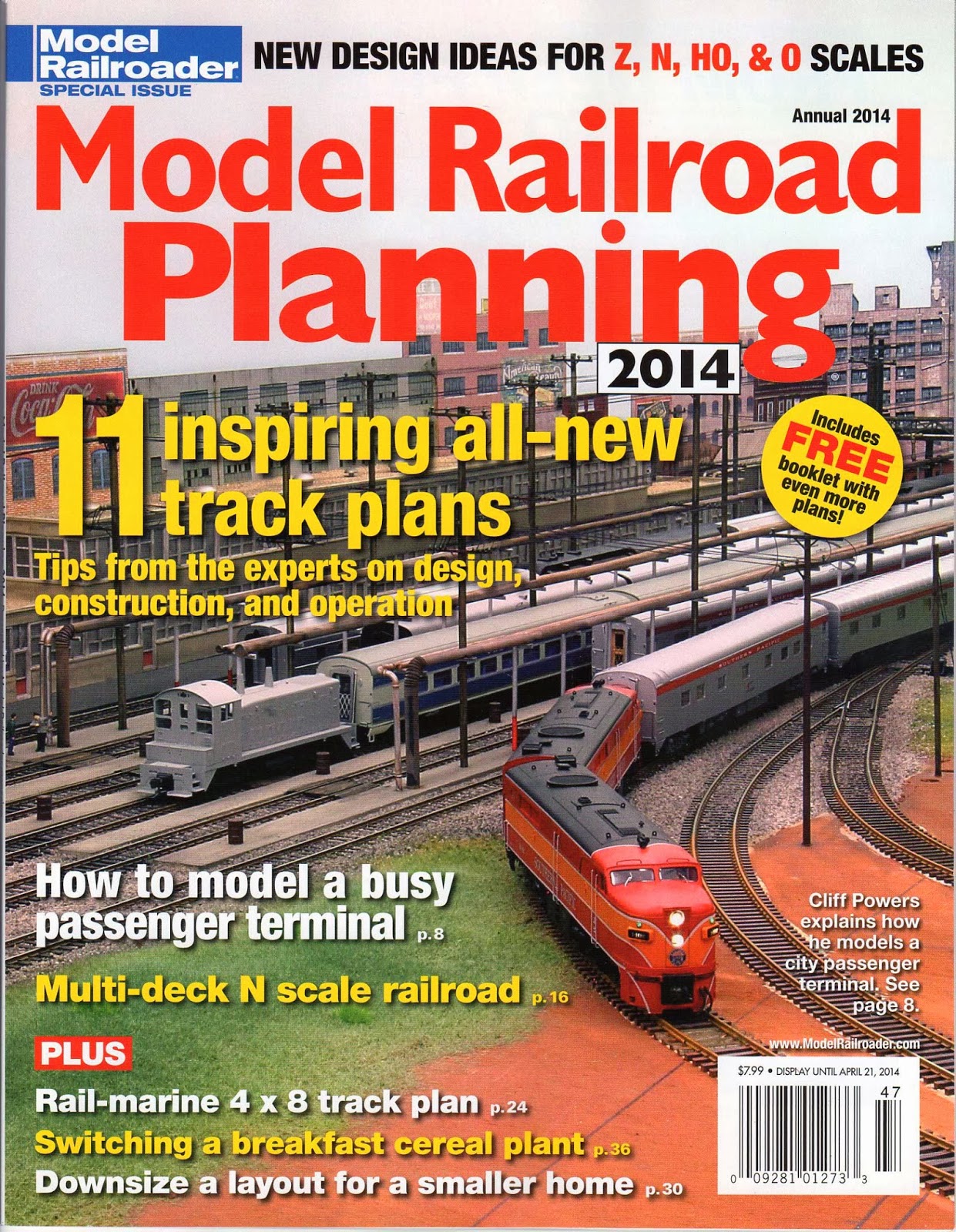 The first article is "operating a busy passenger terminal" which is based on the New Orleans Passenger Terminal (NOUPT). The modelled station is huge and exceptionally well done, including fully lit interiors. The layout is HO scale.

The next article is the "Southern Pacific's Siskiyou Line" in N scale. The layout size is 25 x 27 feet which is pretty big for an N scale layout. One of the things I like about the articles in MRP is the emphasis on the decision-making process in designing a layout. This article didn't disappoint in that department.

"Alice Street in 4x8 feet" is a prototypical track plan based on the Santa Fe rail-marine operation out of Oakland, California. There are some fascinating historical photos (B&W) here.

The next article is called "A moving experience" about a layout built for a newly purchased retirement home. The original layout based on Moscow, Idaho (I think the Americans pronounce it moss-cow) was featured in Model Railroad Planning in 2008.

My favourite article is "Switching for breakfast". This article describes the prototypical train operations for switching (shunting) the large Post Cereals food complex at Battle Creek, Michigan. A description of a typical shift switching the industry was very informative. For me, the best part of the article was a table showing the different spots (positions) within the Post Cereals complex that had to be switched with what particular product (receiving and shipments).  This table alone gave me plenty of food for thought in just what variety can be achieved with a single, large industry on a model railroad. A HO and N scale track plan accompanies the article providing suggestions for how the prototype can be modelled.

A short article on five layouts in four different scales that occupy 14 x 34 inches was next.

Lance Mindheim follows with an article, "Simple plan, plenty of action" based on a southeastern USA switching layout. Lance makes a nice distinction between planning and design - planning deals with more strategic issues that will inform the decisions about overall layout design (track arrangements, for example.). The suggested model railroad layout plan is for a room size of 12 x 13 feet. Lance includes both a plan of the layout and a plan showing switching options.

"Big train, small layout" has an interesting circular design based on a figure eight. It is a portable layout used for model railroad exhibitions and is a little bit different to the norm.

Byron Henderson's article, "North Western's Chicago commute" offers some thoughts about a model railroad track plan 8 x 20 foot in size. The layout is based on the Chicago & North Western's commuter services between the North Western station and the western suburbs of Chicago. Again, the thinking behind the layout design is what is key to this article.

"Slogging up to Locust Summit" is a model railroad based on the Reading Co.'s train operations over Locust Summit near Gordon, Pennsylvania. The track plan fits into a space of 31 x 40 feet and includes plenty of big hauling steam locomotives on this predominantly coal-hauling route. An interesting depiction of a typical day at Gordon gives a nice summary on operations. There are some nice model photographs in this article as well.

Tony Koester next goes out on a bit of a limb with an idea about modelling the same town on two decks and switching cars between them. This idea could be a way to save on available space.

My other favourite article from Model Railroad Planning 2014 is the article by James McNab: "Choosing the right place at the right time". The article describes the importance of time and place in consideration of design and the need for being selective about motive power and rolling stock. It is important to balance traffic levels for certain times of the year (for example, seasonal factors play a major role in agricultural production). James' layout is the Iowa Interstate Grimes Line. The article has both model and prototype photos. Videos of this layout are available on the Model Railroader website to registered viewers: see www.ModelRailroader.com

While the focus of the annual is on US modelling and prototypes, there is enough information and thinking potential here for anyone interested in model railways to find something of use. As usual, this publication is of high quality and recommended.