Modelling the Railways of NSW Convention 2009

Yesterday I drove up to Sydney from Canberra to attend the 26th annual Modelling the Railways of NSW Convention. The convention was held on the very south side of Sydney at Loftus, next to the tramway museum. The drive took three hours one way via the Picton turn-off and Appin.

Two special recognition awards were presented to start the day's proceedings. The awards went to Peter Berg of Bergs Hobbies for his commercial and personal commitment to the hobby, and to Ray Pilgrim for all his help and assistance to the Convention organisers over many years. Both awards were certainly well deserved.

The 2009 Convention followed the format of previous years: attendees go to five selected presentations out of the eleven (twelve in some years) on the day. The five presentations I attended were as follows:

Rather than rewrite my notes of each session and summarise the articles from the Convention booklet, I want to just highlight some of the main points of personal interest.

The presentation by Terry on baseboards went through standard materials (wood, steel and aluminium) and construction (box, grid, and L-girder) procedures. However, I was very interested in the FREMO (free form layout standards) for modular layout construction. I can see how the FREMO standards might be useful for encouraging individuals to actually build a module that can be assembled with other modules into an operating layout. There should be no more excuses that one can't build a layout - just build a module instead and link it up with your friends or club members' modules! Terry mentioned that the Australian Model Railway Association (AMRA) has just published FREMO standards, based on the US FREMO standards. I later discovered some FREMO operations from North America in Utah and Calgary. There are more.

Phil Collins gave us a history of how milled grain products (e.g. glucose, flour, etc.) have been transported by rail in NSW. There were plenty of photos to illustrate his talk. Of special interest to me were the wagons used to transport glucose. Manildra (thanks for the correction, Phil) converted a former BMT milk tanker (BMT 1) for glucose transport. This vehicle didn't last too long since the underframe bent because glucose is much heavier than milk! The other interesting point of note was the use by Cargill of specially converted former DOT (Departmental oil tankers - thanks for the correction, David) into vegetable oil tankers.

The first presentation I attended by Ray Love (assisted by Craig Mackey) managed to put part 1 and 2 into the one session! Ray showed a series of photographs to illustrate the way the NSW railways obtained, transported, and supplied water to service steam locomotive requirements - essentially from dam or reservoir to water tank and water column. Of special interest was the pump house at Glenreagh which Peter Jarvis modelled very nicely. Naturally, like much of the New South Wales railways, there were plenty of variations in type and colour of water supply infrastructure like pumphouses, water tanks, and water columns. Reference to photos and dates is recommended.

Max Stuart's presentation on yard lights was the best presentation of the day, in my opinion. He combined both prototype and model construction in the one session with good photos and illustrations, an informative talk, and a very beautiful diorama to showcase the working yard lights. Max based his work on an article by Bob Stack on yard lights that appeared in an old issue of Australian Journal of Railway Modelling (AJRM). Bob Stack is of course the chief superintendant of South Coast Rail. I am sure both Bob and Stephen Ottaway (editor of AJRM) would be chuffed that Max was able to turn the information from that magazine article into an excellent working model. Attending the yard light presentation was not only informative, but practical as well. Max had some kits available of the yard light with a full set of pieces (including cast goose-necks) and instructions. I bought one complete kit but could very easily go back to Max for more!

The final presentation at 4.30pm was from noted Australian modeller Phil Badger. Phil is well known in model railway circles for his many presentations over the years and his practical assistance to the hobby with brass etchings of components and kits. Phil talked about weathering and how it impacts on track and lineside structures. A big reminder I got from Phil's presentation was to pay closer attention to track and lineside details when looking at photographs, noting in particular railway era and colour variations of track, roadbed, and lineside paraphanalia.

Thanks to Peter Jarvis and the other organisers for another successful Convention.
Posted by Brad H. at 09:57 No comments:

To illustrate some of the points mentioned in my previous blog post, I have included some photos from the archives of my Winmar layout (thanks, Bob!). The photo of the track diagram on the control panel was taken just before the whole layout was put into storage a couple of months ago. The front face needs the masking tape removed at the bottom and another coat of paint.

The layout diagram shows the station (the black horizontal bar at the front) with the main line and a platform road linking both the loco depot (on the right) and the Lake Hume branch and oil depot on the left. There are three loop sidings (including the grain loop - inner left) and a headshunt. The dead end factory sidings (there is only one now) are in purple. Towards the top tight quadrant of the panel diagram is where an industrial siding forks off from the main. Both the main line and the industrial siding curve around to meet the tracks on the traverser. 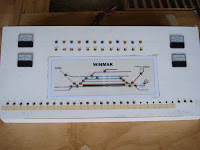 The control panel is a box made from plywood with a lid that opens at the front using a piano hinge. The four panel meters measure current and voltage for each of the two controllers (cabs). The top row of switches are numbered and have blue/orange lights to indicate power and cab (one or two) for the fiddle yard sidings. The bottom row of switches are numbered for the power blocks on the display side of the layout. Three switches to right of the masking tape are for the three turntable roads in loco. The back of the panel box is open for access to the wiring and to house a couple of transformers. The panel box sits on an upside-down baby change table (that was no longer required!) which has been slightly modified with castors and elbow rests. Bob Stack drew up the layout diagram for me using a computer software drawing program. I laminated the plan and stuck it to the control panel box. I still have to finish the edging.

The next two photos show the front of the layout from different ends. The first photo looks down the straight from the Lake Hume branch end of the layout. You can see in this early photo that the sharp S-bend is still in place on the left. The replacement S-bend now takes the siding about four inches into the operating well but maintains the same length. The second photo shows the turntable at the loco depot end of the layout. A bicentennial liveried 80 class is visiting to add some colour to the shot. 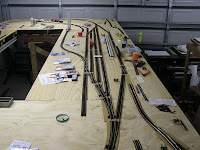 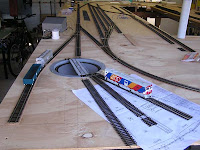 This last photo shows the unfinished twelve tracks on the traverser. All the tracks are down now and wired up. Note the handles (on both sides of the traverser) for moving the traverser in and out to match up the selected fiddle yard track to the main line of the layout. You can also see one length of the aluminium framing that holds the layout baseboard grid together. 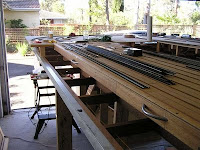 When I get my other computer tower connected up to a screen, I'll find and then copy some more photos of Winmar to my "active" computer for uploading to the blog.
Posted by Brad H. at 17:06 No comments:

Notes on a layout - Winmar

I was searching through a bundle of papers in the study over the weekend and found my notebook about my Australian layout, Winmar. It was interesting reading to go back a few years and see how some of the ideas formed about the layout. Here are some tidbits from those notes:
There were a few more bits and pieces of information in the notebook. However, much of what was important in the early planning and construction days were formed from the thinking recorded in the notebook and mentioned in point form here. Perhaps if I had started a blog back then, there would have been even more revealed and remembered.

Now, if I could find some of the digital photos that either Bob or I have taken of the layout to actually illustrate these notes I'd be very happy!
Posted by Brad H. at 20:21 No comments:

The 2009 NMRA Convention in Sydney, Australia

Following on from my previous blog post, I must mention the NMRA Australia 2009 Convention to be held at Castle Hill (Sydney) between the 2nd and 5th of October. It is the 25th anniversary convention so it too will be a special time. The NMRA convention program is out now. Registrations are being taken for the convention plus orders for commemorative shirts. There are also plenty of layout tours featuring mostly US and Australian prototype model railway layouts.

The dates do clash with the AMRA Sydney Model Railway Exhibition at the Whitlam Leisure Centre in Liverpool. However, I believe there will be time on the Monday available for NMRA convention attendees to make the trip to Liverpool. The Sydney exhibition is returning to the Liverpool venue after a few years away at Hurstville.

The NSW October Labour Day weekend promises to be a very, very busy time.
Posted by Brad H. at 19:56 No comments:

The 2009 NMRA Convention in Hartford, USA

I am a National Model Railroad Association (NMRA) member. When I was living in Sydney I'd attend the monthly layout visits when I could and found them always interesting events. Now in Canberra, I have made a couple of layout visits but still to get into a more regular routine.

One of our Canberra mob, John P., is heading off to the US at the end of this week to attend the annual NMRA Convention being held this year in Hartford, Connecticut. The convention begins on July 5th.

It's likely that several Australians will be making the trip to the US to go to the Convention in Harford, CT. The clinics and layout tours look terrific.

My hope is to go to the 2010 NMRA Convention in Milwaukee. The 2010 convention will be the 75th anniversary of the NMRA so it promises to be extra special. And, Milwaukee is (sort of) close enough to my favourite US prototype railroads, the Soo and the Dakota, Minnesota and Eastern.

In the meantime, I hope John and the other Aussies have a great time in Connecticut and bring back lots of good ideas and tips for the rest of us!
Posted by Brad H. at 11:49 No comments: