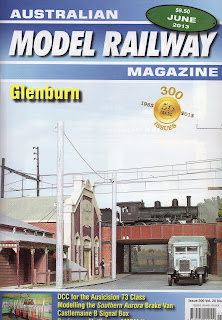 The 300th issue of the Australian Model Railway Magazine (AMRM) is a significant achievement.  As the recent articles on the history of AMRM attest, many people have contributed to the production and commercial success of the magazine over the past fifty years. Bob Gallagher and Alan Brown were to my mind the cornerstone of that success.

The current issue (June 2013) of AMRM continues the tradition of featuring Australian model railway layouts. Glenburn is a truly wonderful layout depicting a time that is often not often portrayed on a model railway. Over the years there have been many fine layouts depicted in the pages of AMRM which have provided an inspiration to us all. I must add that I was very impressed with the photo taken by John Burford on page 55 of the current issue showing a nicely lit cameo scene from his new On30 layout. John's reminiscences are similar to mine as well.

I bought my first copy of AMRM (Issue 79) from Micro Models at Hornsby in 1976. In those days Micro Models was located in the Westfield Plaza shopping centre. Micro Models still exists, under different ownership, and is now located on the Pacific Highway at Hornsby. The success of this hobby store over an equivalent amount of time as AMRM is also worthy of note. 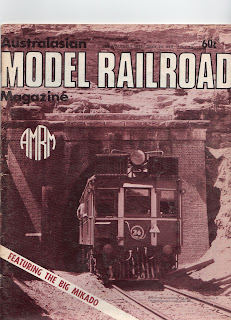 That first issue of AMRM for me was the trigger to take model railways seriously and to focus on Australian (NSW) railway modelling. Up until that time, I had the usual assortment of Triang/Hornby models from train sets acquired as presents over the years. I had no permanent space for a layout so the model railway was only put up occasionally, on a carpeted floor no less!

In that particular issue of AMRM were articles on The Mayfield Lines, the SAR 720 steam locomotive, making styrene windows, and three pages of reviews. I was later able to visit The Mayfield Lines in person, an O gauge wind-up model railway in the garden of Len Clark. Ironically, this type of model railway was already "old hat" but it emphasised to me how much the hobby had to do with imagination as much as it did with constructing a piece of railway reality.

I studiously acquired back issues of the magazine and bought each new copy as it appeared in the hobby shop. Around the same time, and not far from where I was living at the time, was Mansfield Hobbies at Waitara. I would have to say that it was a combination of AMRM and David Anderson from Mansfield Hobbies who established my direction into the model railways of NSW.

While many years have passed since those days, and I now model a US prototype railway, AMRM was a part of my model railway development. And while I may decry the cluttered page layout of the magazine and the front cover that needs a modern facelift, I don’t fail to appreciate the hard work that goes into the regular production of the magazine and the exceptional quality of the photographs - James McInerney is to be congratulated.

And speaking of model railway magazines, I should add that my involvement with the Australian Journal of Railway Modelling ceased in October 2011, four months after the magazine was successfully relaunched at the Epping Model Railway Exhibition with issue 11. Stephen took full control of the administration, sales, distribution, communication, and publishing of the magazine after that date. I hope that another issue will be forthcoming because AJRM has given us some excellent articles in the past.
Posted by Brad H. at 13:01 2 comments: