Another Sydney Model Railway Exhibition is over. The three day event will be on again next year - the 50th!

There was a good selection of layouts and plenty of commercial stands at the exhibition.  I did feel that there were less layouts than usual but this certainly increased the aisle spacing and made it easier to walk around than in previous years. And like previous years, the Saturday morning crawl to get into the exhibition was slow. Note to exhibition organisers: is it possible to have four ticket booths operating instead of two at the busy periods of the exhbition please?

While many of the layouts at the exhibition had been on the exhibition circuit quite a few times before (no, Brisbane Waters from the Epping Club missed out this year and was replaced by the more recent Brunswick Park layout). But there were  a couple of new arrivals. The layouts that most caught my eye included the following:

The NSW O scale (7mm) layout Arakoola was very well presented. It follows the familiar NSW branch line format popular in HO scale but this time double the scale size. There certainly is the impression of weight and power when you see these O scale trains in operation, at realistic speeds, on a nicely scenicked layout. The layout is 17 metres in length and operated by digital command contril (DCC). 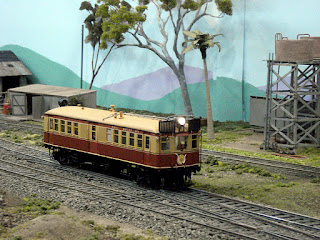 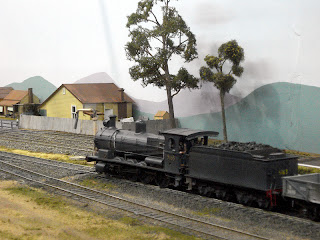 A G scale layout, Shady Hollow, featured a logging and forestry scene. It was amazing how much detail could be accomplished in such a relatively small layout size for a G scale exhibit. 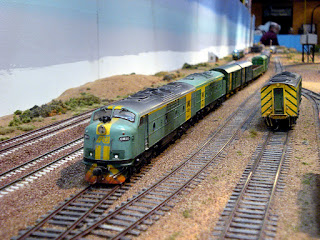 On a much smaller layout was the compact but well detailed Broxburn Sidings. This OO scale (4mm) layout is a small shunting layout with a freelanced Australian theme (Quinton River). Interestingly, the locos and rollingstock use Alex Jackson couplers, popular among British model railway folk. Having come all the way from Queensland, Broxburn Sidings was a nice addition to the Sydney exhibition. 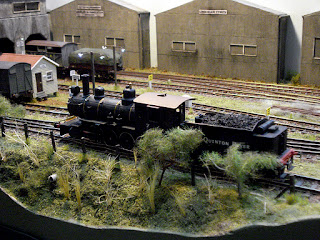 A new layout to the Sydney Exhibition was Mungo Scott's, based on the iconic flour mill on the Metropolitan Goods Line in Sydney. This layout was built over a fifteen month period by members of the Arncliffe Model Railway Society (formerly Sydney Model Railway Society). 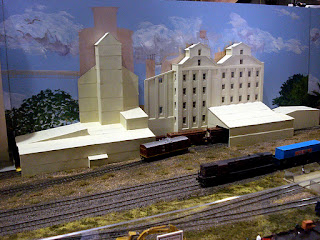 Wallerawang from the Guildford Model Railway Group is a good solid exhibition layout. The station building and footbridge are standouts, but the rest of the layout is well modelled and presented as well. For more information, try http://www.gmrg.org.au/ 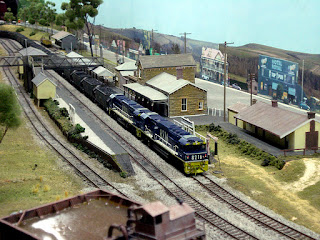 Oddwalls is another NSW-based HO scale layout, having started the exhibition circuit earlier this year. I enjoyed looking at the layout when I first saw it, and I still enjoy the detail in the layout now. The layout also presents very well and is a good size for both setting up and for viewing. 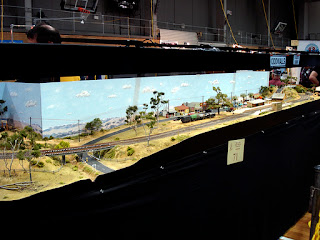 The good-hearted chaps from the Illawarra Model Railway Association were there with their US-based layout Kelly River. Kelly River features an operating Bascule Bridge and gauntlet track. You can find more information about this layout at www.imra.org.au/kelly.html 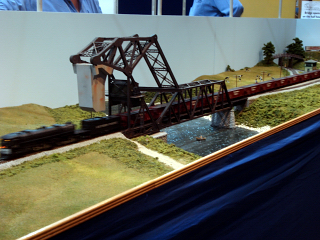 Still one of my favourite exhibition layouts, and still going strong, was the HO scale layout, Dungog. Dungog is an actual town located about 80km north of Newcastle and is famous as the birthplace of NSW and Australian cricketer, Doug Walters. I must say I find myself looking on the layout for a chap or a kid with a cricket bat somewhere but have yet to see it. The layout uses photographs from the Dungog district which are very effective. At the left hand end of the layout (when viewed from the front) is Martin's Creek and the quarry, while at the opposite end is the butter factory. Dungog is very nicely composed layout with some great scenery, buildings, and bridges. 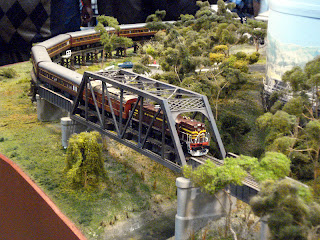 Another layout on show that I liked, but unfortunately the photos were not of sufficient quality to produce here, was the HO scale Tasmanian Railways Avoca. Having a layout based on Tasmanian Railways (the Fingal Valley) was something different to see and something to be encouraged for the future.

And for the kids, there was the popular Lego layout, Brickston Valley. 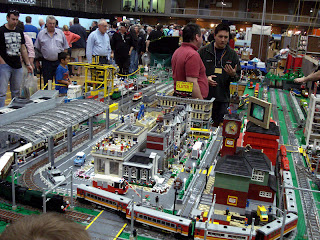 The exhibition was certainly well attended on the Saturday. I enjoyed my time there looking at layouts, checking out some of the commercial outlets, and chatting to various modellers throughout the day. I trust the exhibition organisers were happy with the three day show.
Posted by Brad H. at 13:27 No comments: