The 2016 Epping Model Railway Club's exhibition last weekend was a good one.  There were 22 layouts on display and 23 commercial exhibits. As usual, the second hand stall was very popular for sellers and buyers alike. The modelling clinics were a little different this year with a focus on building home layouts. The clinics were managed by David L. from the Epping Club in concert with the National Model Railroad Association (NMRA) who manned the stand and answered questions from the public relating to all the facets of building a home layout. Great idea, David!

I caught up with a good many fellow modellers at the exhibition and still managed to actually see the layouts on display. Here is a sample of the layouts that caught the eye of my camera.

Goulburn (Australian/NSW, HO scale) was a new exhibit from the Guildford Model Railway Group. The layout is 6.5 metres (22') long and 2.8 metres (9') deep. The main feature of the layout is a wonderful model of the prototype Goulburn station. Other building features include the long run-through goods shed, steel footbridges, and the workshop area with overhead crane. Trains from the period of the 1960s to the present day made their appearance, reflecting the individual membership's era preferences. The layout is operated by conventional DC control. 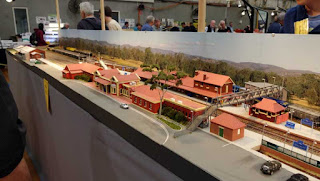 Gordon (VR/SAR HO scale) was a layout I had not seen before. It represents the prototype in near the Dandenong Ranges top of the Great Dividing Range between Melbourne and Adelaide. A good variety of Australian locos and rollingstock from the 1960-1980 period was on display. Interestingly, the May and June 2016 issues of Newsrail feature two articles on the prototype Gordon station. 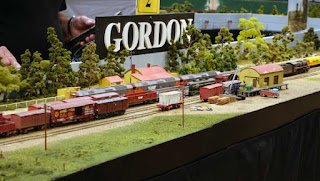 Bullo Pit (British, O scale) is a 7mm/foot scale layout based on a real location in Gloucestershire in the 1920s. The layout represents the tidal inlet from the River Severn and associated rail infrastructure. There was plenty of shunting going on with a range of four-wheeled wagons. 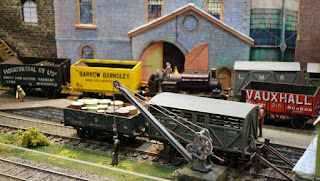 Erbschaft (German, HO scale) is a fictitious town set in the 1960s.  The layout is Marklin with centre-stud track and a good range of locos and rollingstock. Buildings are mainly kit-built structures from Faller and Kibri. Erbschaft was a very nice medium-sized layout. 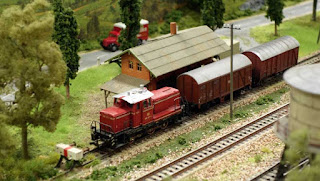 Over the Fence (Australian/NSW, HO scale) was a new layout to the Epping exhibition, although it had debuted at Sandown in Melbourne earlier in the year. Once again the houses and buildings on the layout represented superb renditions of real structures modelled to scale in styrene. A double-track main line kept trains moving throughout the day; a highlight being the running of an Auscision Countrylink XPT that looked superb snaking its way to the rear of the houses. The durable H&M Clipper transformer powers the trains and never seems to miss a beat. 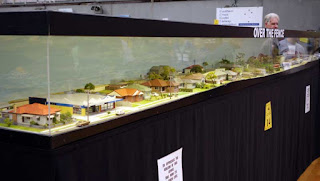 Oddwalls (NSW, HO scale) made another exhibition appearance from the craftsmanship of Geoff Small. Oddwalls represents a fictitious rural NSW town set in the 1960s. The station area with the main street and country-style buildings are the central scenic highlight of the layout with plenty of detail to be spotted throughout. This layout is compact-sized and an entertaining NSW-themed layout that runs well and looks great. 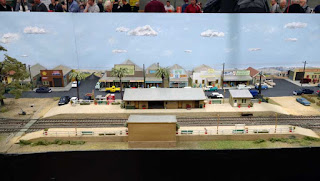 Wumbat (NSW, HO scale) represents another fictitious NSW rural-based layout. The layout dimensions are 3 metres by 1.2 metres and consists of six modules. Note the impressive way the layout is displayed in a theatre-box style of presentation. 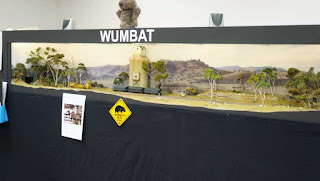 Industry Lane (British, OO scale) is based on a fictitious industrial branch serving a number of industries: fuel/oil, cement, and a large manufacturing complex. The focus of the layout is shunting and this is accomplished using short wheel-based freight wagons and a single locomotive operated with digital command control (DCC). The entire layout, including fiddle yard, is only 1.5 metres (5') in length. The fiddle yard uses a sliding traverser to move trains on and off the layout. I really enjoyed this layout and admired what could be achieved in a relatively small space. Industry Lane was my favourite layout from the exhibition. 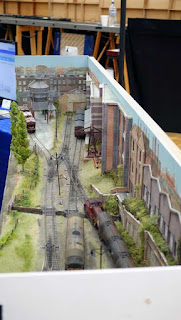 Moonan Flats (NSW, O scale) represents a what-might-have-been scenario had the real railway reached this town in the Barrington Tops of NSW. The station layout is simple but highly detailed, enabling a good showcasing of NSW outline O scale locomotives and rollingstock. 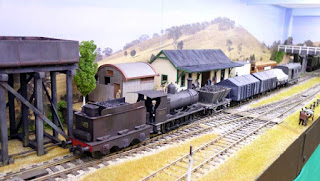 Wallerawang Junction (Australian/NSW, HO scale) is based on the prototype station on the Main Western line beyond Lithgow. The era modelled is the 1960 to mid-70s period when Wallerawang was a busy rail station and yard. There was plenty of steam and diesel train action on this layout. 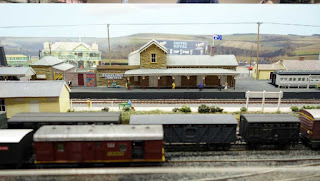 Bullenbung Creek (NSW, HO scale), the featured layout at the Modelling the Railways of NSW Convention earlier this year, made its first Epping exhibition appearance. The layout took its inspiration from Belfrayden on the Uranquinty-Kywong branch line. This lightly-trafficed rural branchline has been well modelled using hand-laid code 55 rail soldered to PCB sleepers. The layout is operated using DCC and locos all have sound. My favourite was the 24 class (2417 pictured below) which performed its duties with no-fuss aplomb. 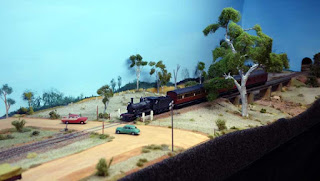 The Yard (NSW, HO scale) was another NSW-themed layout making its first appearance on the exhibition scene. The focal point is indeed the yard and the Pioneer cement silos. Other rail-served industries included stock pens, loading ramp and goods shed. Track is Peco code 83 with insulfrog points operated by Tortoise switch motors. The layout uses an NCE Pro Cab for DCC operation. 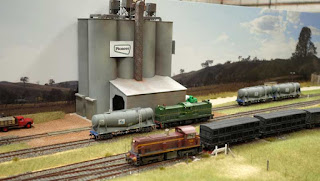 Stikodelom (NSW, O scale) showcased some quality O scale locomotives, rollingstock and scenery. The location is fictitious but certainly has that generic rural NSW feel about the place. The Beyer-garrat (pictured below) is a very impressive sight in this scale. 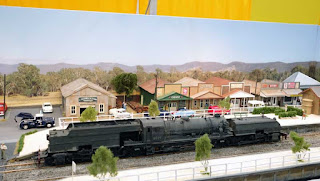 Bethungra was the new layout from the Epping Model Railway Club making its debut exhibition appearance. The trees on the layout are superb (well done, Phil). Unfortunately, I don't have any photos but can direct you to this Youtube clip from John Thoroughgood who captured the layout in a nice two minute video.

And of course, there was the ever-popular Lego layout. 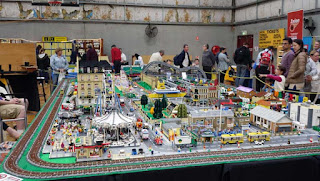 I really enjoyed the exhibition and the opportunity to chat with friends from the hobby.  I'd like to thank the Epping Model Railway Club for another successful event.
Posted by Brad H. at 18:13 4 comments:

It is almost half way through 2016 but it feels like an eternity since just over a year ago my father was diagnosed with terminal cancer.  He was given 4-6 weeks to live. Back then he was 89 years' old.  Many people would nod their head and say he had had a pretty good innings. The thing is, not many people are prepared to give up their wicket irrespective of their score. And this was, and remains true even now because my father is still with us and still exhibits the same patience and caring for others that he always has.

Dad's home had to be sold to pay for the nursing home accommodation bond and ongoing monthly costs which are substantial. It's a super expensive business being sick and old, and in need of professional palliative care. There were some other problems too that just compounded the anguish and strain which didn't make things easy, including some medical issues in my immediate family. For me, after four years of suspected prostate cancer (including four lots of biopsies in that period), it was detected and confirmed in February. I had surgery in April. I had spoken to a number of people (incuding some railway modellers) who had gone through it and I took heart from their positive experiences. The surgery went well. My latest test result is good. My recovery is better than what I'd expected at this time. Fingers crossed that this continues.

In the last twelve months or so I have come into contact with more aged, frail and sick people than I could ever have imagined. I have spent countless hours visiting doctors, health professionals, aged care facilities, banks and other professional services. Not surprisingly, there was no spare time for things like model railways. The last twelve months have shown me a completely different side of life that I had never encountered before.  And what, you may ask, does it all mean?

Well it means a few things which I think are very important:

I dipped my toes back into the hobby at the Modelling the Railways of NSW Convention. I caught up with several people and had a good chat about a range of different things; health issues and family issues included. Model railways then is not just about model railways.

Many of my friends who have been supportive have come from the hobby of model railways. This includes my good friend Alan from Kansas City in the USA who I met a few years ago through the NMRA. And it includes modeller friends in Australia from my own city (thanks especially to David) and from people in Sydney and the Central Coast as well.

I will be attending the Epping Model Railway Club's exhibition at Normanhurst this coming weekend (likely to be Saturday for me at this stage). Perhaps I will catch up with some more friends for a good chat, see some inspiring layouts, and come home refreshed and energised for the future ahead.