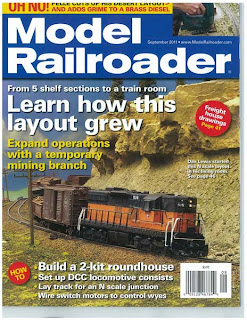 I received the latest (September 2011) issue of Model Railroader last week. I have just finished reading the magazine. There were plenty of great articles to read in this issue.

There is a great N scale layout by Dan Lewis on his Milwaukee Road/North Montana line. The original layout had been a shelf layout. Dan was able to increase the size of the layout into a much bigger room (18' x 24') - about the size of a double garage in Australia. The article gave me cause to reflect that building a layout can start small before taking opportunities later on to expand the size of the model railroad territory. It's not bad advice as I scribble away with track plans for a master layout that hasn't actually progressed very far!

However, there were a couple of surprises.

The first was that executive editor of Model Railroader, Andy Sperandeo, was retiring after a career with Kalmbach Publishing spanning 32 years. Fortunately, Andy will still be writing the monthly "The Operators" column where he discusses prototype railway operation.

The second surprise was a short article from Pelle Soeborg from Denmark who has cut up his superb Daneville and Donner River HO scale layout. The layout was featured in a Kalmbach book, Mountain to desert: building the HO scale Daneville & Donner River, published in 2006. Pelle has been a regular contributor to Model Railroader over recent years and will be writing in the future about his new layout. I look forward to that. The short article in this latest issue of Model Railroader gives several tips on how to cut away and keep structures from a layout that is being dismantled. The article is supported by an interview with Pelle and some photos of his new layout on the registered users section of the Model Railroader website.

This weekend sees the Caulfield Model Railway Exhibition on in Melbourne. Unfortunately, I cannot attend this year.

The exhibition promises to be a good one, especially with a number of commercial exhibitors showcasing some of their forthcoming models as well as a surprise or two!

Auscision have a new model for release at the exhibition - just waiting on a friend to get back to me with what the model actually is (VR U vans with advertisements on the sides). Auscision will also be selling SCT containers. SDS and On Track Models are expected to have samples of forthcoming models - oil tankers I believe in the case of SDS, and the new Victorian VSX / VLEX wagons from On Track. Casula Hobbies and Trainorama will also have a selection of models on display and for sale. AJRM should be on sale at the exhibition; with Branchline Models and Gwydir Valley restocking tomorrow when Stephen makes a delivery.

I will miss not being there but I hope that the exhibition is a good one for all concerned.
Posted by Brad H. at 11:49 No comments:

I managed an hour each yesterday and today for a quick look around the Malkara Exhibition here in Canberra. The exhibition, organised by the ACT Model Railway Society,  is a major fundraiser for the Malkara School. The show includes a range of scale hobbies including model railways, model cars, plastic modelling, remote control boats, and dolls houses. I was naturally there to help a good cause and check out the the model railways.

There were about a dozen model railways on show, not including the popular train ride for the kids outside.

As I only had a short time at the show because of report writing commitments at home, here is a sample of the layouts at the exhibition.

Yendys (Sydney spelt backwards) is the HO scale club layout of the ACT Model Railway Society. The layout is a double-track mainline with a suburban station and electric suburban carriage sidings. A feature of this layout is the catenary, something that really adds realism to the scene. The following three photos highlight some of the scenes from this layout. I especially like the third photo showing a suburban train about to pull away from the station among the hustle and bustle of the day. 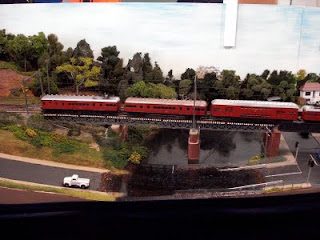 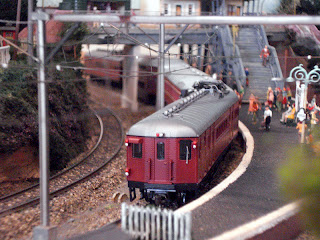 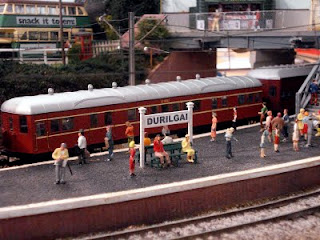 Another layout from Canberra modellers was Willigobung (HO scale). This layout is a generic NSW country through station on a busy two track mainline (obviously the Main South). A good selection of trains is always on show to keep the punters happy. 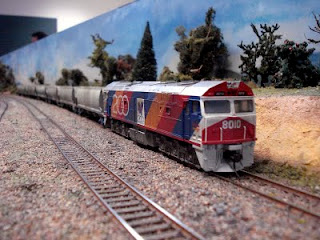 The amiable lads from the Illawarra returned to Canberra with their exhibition layout, Waterfall (HO scale). 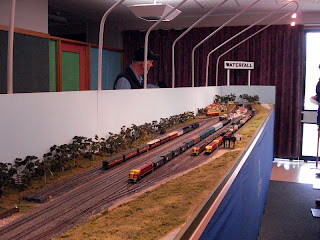 South Bend and Hilltop Railway is an N scale US-prototype layout. A feature of this layout was the long trains snaking through a variety of scenic elements. The yard at the front of the layout is also a good spot to watch the trains pass through. 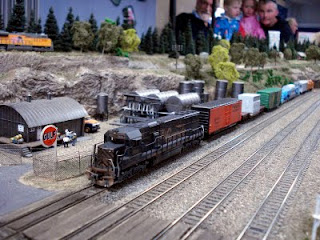 The Epping Model Railway Club (the "yellow shirts") made the trip to Canberra with their exhibition layout, Brunswick Park (HO scale). This layout features a Sydney suburban scene with a focus on the industries around the North Strathfield/Concord  area. 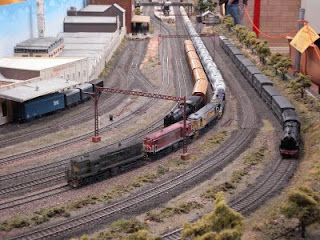 The magnificent Sydney Central Station (N scale) was back on the exhibition circuit after several months on public display at the NSWRTM office on Central Station concourse in Sydney. It is always a pleasure to admire the fabulous detail and modelling skill of this remarkable layout. 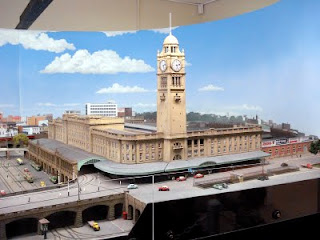 Several model railway shops were also in attendance. They included Casula Hobbies and Model Railroad Craftsman (both selling the latest issue of Australian Journal of Railway Modelling I was pleased to see), Pallas Hobbies, and Runway 13. Also in attendance were Ron Cunningham of Eureka Models and John Eassie from Austrains. Austrains seemed to be pretty busy whenever I popped my head in there and I am sure the local Canberra and South Coast modellers kept the cash register ringing! I did my bit in buying another NR for myself on Saturday at the discounted price of $200. One of my mates bought three NR's and another two bought one each - who said that NR's wouldn't still be popular?

I hope the weekend was a big success for the organisers and the school. It was the 39th Malkara exhibition and that is quite an achievement. Well done!
Posted by Brad H. at 21:58 2 comments: