This weekend saw a major annual wargaming and games convention in Canberra called CANCON 2011. The event was organised by the Canberra Games Society Inc. in conjunction with the Australian Games Expo.

I have a slight interest in wargaming in terms of history, particularly the North Africa conflict during World War II. I also have a couple of books and magazines on military matters that I sometimes pull from the bookshelf for the odd read. I was therefore interested in seeing what this wargaming hobby looked like and whether there was anything that might be of interest to railway modellers.

So, on Saturday morning (yesterday) a friend and I drove to Exhibition Park to see what CANCON was all about. The first thing we noticed after we parked the car was that entry to CANCON was free. Now that was a nice surprise.

When we entered the pavilion we were amazed to see table upon table of wargaming activities. In addition, there were several commercial outlets selling everything from books and magazines, to military games and figures, scenic materials and paints. My friend was interested in the range of paints military modellers used while I was quick to spot a beginner's wargaming table where I settled down to watch the first battle of a WWII game. As it turned out, the wargame I was watching was indeed at the beginner level but was using a popular set of rules called Rapid Fire!. Whilst the scenery on the table was pretty spartan, the rules (seemingly) were incredibly complicated. I was assured that the rules were not as difficult as first imagined.

The thing about these tabletop wargames is the use of die and a tape measure. The rules tell you what capacity each piece of military equipment or personnel has to move and fire, distance per move, and what type of attack or defence is available. The die can tell you different things, depending on the game and the number of die used at each turn. But the die generally tell you things like intensity and whether or not you are successful with your action. The die also gives unpredictability to the game. The tape measure tells you how far something (a platoon or tank) can move and whether the distance between it and the target is within range. It still looked complicated no matter what wargaming table I watched.

Most of the wargaming tables were actually part of a pre-organised tournament. People had signed up to do battle at CANCON well before the event date. At CANCON, the tournament was a big part of the event. WWII wargames seemed the most prevalent, however, there were other period battles (including American Civil War, Mexican-American battles, Napoleonic conflicts, and more modern scenarios like Vietnam - using helicopters on stands). In addition, there were fantasy battles involving all manner of strange creatures, as well as the popular Warhammer figures and games.

Whilst the scenery on the wargaming tables was nowhere near as realistic as for model railways, the painted figures were absolutely amazing. Interestingly, the figures seemed exceptionally well painted for the scale (for example, 20mm or 28mm) but the tanks and buildings were not so well detailed. Mind you, if one was to go to a plastics model convention and see the work on 1:35 and 1:48 tanks and military models, you would see some examples of absolutely superb detail and amazing paintwork.

A feature of the hobby that was readily apparant was the strong sense of military history in the room. There was a plethora of books and DVDS (just like the model railway hobby and the historical nature of railways). However, more impressive than that was the knowledge these blokes had about military history. I wondered how many battles were played out on the tabletops and how many more (and intense) battles were part of the banter and challenges of the human interaction across the tabletops!

The Games Expo was in the neighbouring pavilion and had several commercial outlets selling all manner of board and card games. Having grown up with just playing cards, Monopoly, and Scrabble, I was astounded at the variety of games on sale. In the Games Expo hall were more tables for wargamers, as well as tables at which selected board games were being played.

Back in the first pavilion, I had a good look at the commercial stands. Like our model railway exhibitions, there was a good range of items serving the needs of the hobbyist/enthusiast/nut case! I decided that I should at least come home with some type of wargame so I purchased a boardgame based on North Africa during the Second World War. Funnily enough, yesterday (when I bought the game) was the 70th anniversary to the day of the Allies taking Tobruk!

My friend was equally impressed with the show, although his search for a particular brand of paint was unsuccessful. He was, however, filled with the buzz from the size of the event and from the people who were clearly very passionate about their hobby. I went back again late this afternoon for a quick final inspection, albeit CANCON is open tomorrow (24th January) as well.

As one wargamer said to me, "this hobby gives me the three things that most interests me: modelling, history, and strategy". That statement seemed perfectly reasonable to me and not too different from that of railway modellers.

World War II wargaming scenarios were popular, including these tabletop scenarios in Europe and North Africa. 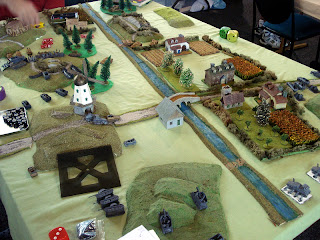 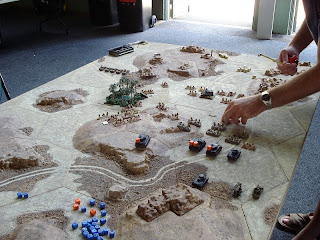 The Allamo was a well set up game with some amazing figures. 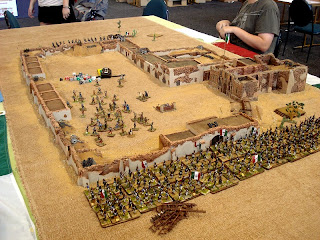 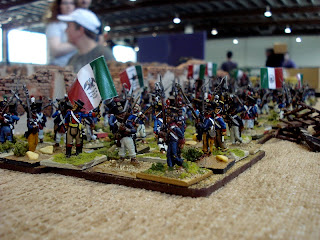 Overall, I had a very good time at CANCON. Whilst I can't say that I have been converted to wargaming, I did at least enjoy the spectacular; the intensity of interest by the wargamers themselves; and an appreciation of another popular hobby.

But model railways remains the number one hobby for me, thank you very much!
Posted by Brad H. at 22:16 4 comments:

A couple of years ago I wrote a letter to AMRM asking why it was that real radio control had not taken off in model railways.

We all know that to get a reliable model railway we need to have excellent trackwork. There is an emphasis on wiring the track effectively to transmit power (both DC and DC) and digital signals (DCC) for maximum operational performance. But getting the electrics right and ensuring the track is clean and well wired is often very challenging; and certainly time consuming.

A series of articles in AMRM followed explaining the operation of a Sydney suburban passenger set using battery and radio control. The premise was excellent but I did have some misgivings on the amount of work involved. I understand that Bergs Hobbies might be providing kits for this type of radio control as used in the articles.

The layout design special interest group (a NMRA group based in the US) ran an article about using radio control for model railways a few years back (Layout Design Journal, Issue 37, pages 42-45). I need to track down a copy.

As someone who is almost ready to jump onto the DCC bandwagon, I am wondering how likely and how soon it will be before battery and radio control becomes the standard operating system for model railways. Being able to disassociate control from the track would be a huge boon for the hobby. Such control is already available in model planes and model cars, albeit of a somewhat larger size to HO/OO scale model railways.

And I know how fast technology is moving in model railways. The marketing manager of Hornby in the UK was recently reported (in Railway Modeller, I think) saying that in a couple of years now it may be possible for model locos to emit real prototype engine smells!

Is DCC going to be just an intermediary step between between analogue control and remote controlled battery powered locomotives? I desperately need to know before spending a lot of money going down the DCC path!
Posted by Brad H. at 11:51 4 comments:

I hope Santa was generous over Christmas and that the festive season has been a rewarding one. Let's hope 2011 is a good year.

For me at Christmas time, I scored an Ezi-kit South Maitland Railways (SMR) 10 class kit which will be very nice indeed. I last saw one of these prototype SMR 10 class locos in action on a visit to the Rothbury Riot Railway at Branxton a few years ago.

I was actually up at Branxton a couple of days ago on my way back from a week's holiday on the NSW mid-north coast. I spent an hour or so by the trackside in 40 degree heat taking a few coal train photos. Madness I know!

Actually, Branxton would be a great location for an exhibition layout, either in steam days or in more modern times. There's plenty of railway action on the double track main line. The branch off the main to the Rothbury Riot Railway (ex SMR) would be an interesting extra.

Other than doing some reading, some track plan doodling, and checking out two exceptional model railway layouts (one up at Hawks Nest and the other being the excellent South Coast Railway - see the blogroll), I had a pretty relaxing break.