I made the trip down to Melbourne over the weekend to visit the Caulfield Model Railway Exhibition. The event was organised by the Australian Model Railway Assocoation (AMRA) Victorian Branch. The exhibition was held at Caulfield Racecourse as in previous years.

There were 35 layouts and just over 30 commercial stands at the exhibition. I thought Waterfall and Mullet Creek were the standout quality layouts at the show this year, even though I have seen them at NSW exhibitions in the past. The wonderful Victorian Railways Maryborough layout was not in attendance which was a pity as this is an absolutely brilliant layout.

Of the layouts that caught my eye, here is a sample.

Jackson Creek (On30) set in the Otway Ranges of Victoria and showcased some wonderful buildings from the Outback Model Company. 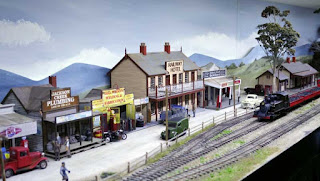 Filching Road (O scale, British) is a fictitious location in Eastbourne, East Sussex in the southern part of England. The layout is small and can fit in the back of a station wagon (estate car for all you British folk out there). I just love this tank locomotive. 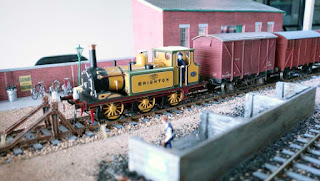 Catherwood Junction (OO scale) is a British layout which represents a small junction station in the West Dorset part of south England. This is a lovely layout with nice composition giving the full flavour of compact British modelling. Operation is by digital command control (DCC). 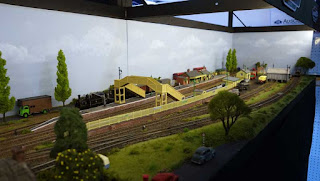 Midsomer Norton (OO scale) is another British layout and one I have enjoyed at previous Caulfield exhibitions. I understand that the layout is up for sale now. The layout is octagonal in shape and features the Somerset and Dorset Joint Railway. The photo below shows loading coal from the Norton Hill colliery which operated from 1839 to 1966. 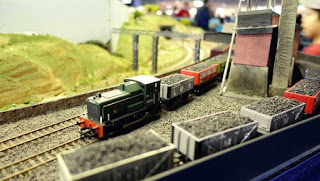 Crosby Stephen (OO scale) is a British-themed layout based on the Settle and Carlisle Railway in the inter-war period. The station has features from Crosby Garrett and Kirkby Stephen on the prototype which is where the modelled station gets its name. This layout is owned and operated by the Sunbury Model Railway Club. 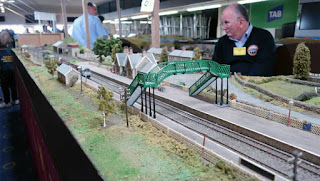 Triang Hornby Wrenn Minic (OO scale) was a trip down memory lane with a layout featuring these pioneering model railways from the UK. Many of us would have started out with models from this period. It is also a good reference point to see how far manufactured model railways have come; yet it remains surprisingly appealing even after 50 years of model railway development and technology. 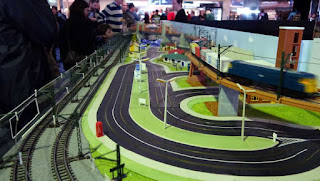 A town like Alice (HO scale) is a modern Australian-themes layout featuring trains from Australian National Railways (ANR) and Genesee & Wyoming Australia (GWA) prototypes. The layout is operated with DCC and follows on from the previous layout, Barcoola. 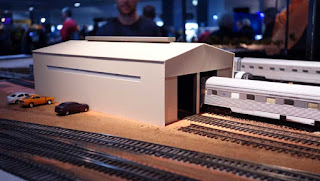 Broadview (HO scale) is based on a prototype location in Central Victoria. The layout features a broad range of trains from Victoria and interstate trains from NSW. This layout has plenty of railway action with three main lines (two broad gauge and one standard gauge) to keep the punters happy. 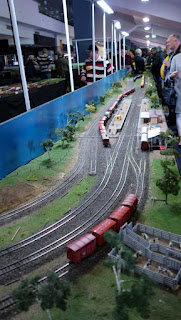 Black Springs (HO scale) is a fictitious location in Victoria. The station resembles Swan Hill. This layout had been absent from the exhibition scene for a number of years but is now back with DCC and JMRI digital operation. 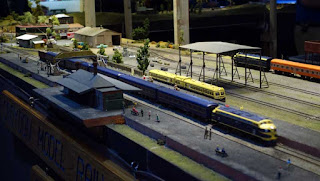 Mullet Creek (HO scale, NSW) made the trek from NSW and was a standout layout from the exhibition. A feature that enhances its quality is the use of layout lighting, something that many layouts at Caulfield still do not provide. The venue has poor lighting which makes layout lighting all the more important. The exceptional water scenes always continue to amaze. 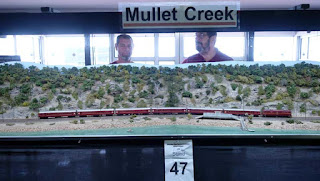 Waterfall (HO scale, NSW) was the other standout layout. The layout is based on the real locale of Waterfall south of Sydney on the line to Wollongong. You will see a great variety of steam and diesel-hauled trains on this layout. The backscene is especially noteworthy. 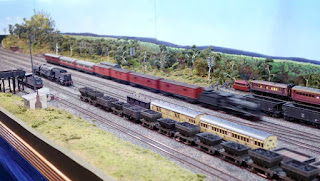 Neubahn (HO scale) was a European-themed layout featuring a good selection of modern diesel freight and passenger action on a double track mainline. 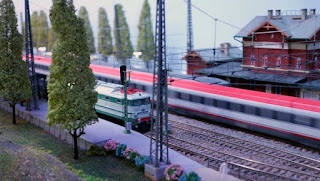 Rounding off this post is Stone Creek (N scale, US). This nicely proportioned N scale (1:160) layout represents a branchline with point-to-point operation between Roscoe and Whitestone. The trestle bridge was scratchbuilt. I like the use of the dam/weir to link the backscene with the modelled scenery. 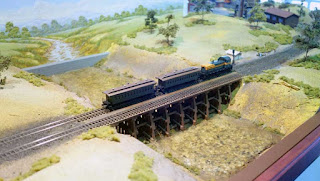 Once again, an enjoyable day out with the World's Greatest Hobby.
Posted by Brad H. at 10:26 3 comments: