Next weekend the Murray Railway Modellers will have their 2011 model railway exhibition in Albury (NSW). The exhibition is being held at the Mirambeena Community Centre, 19 Martha Mews, Lavington. Lavington is on the northern side of the city of Albury.

Unfortunately, I won't be able to make it down for the show but here's what's on offer:

Full details about the exhibition (including a map) can be found here.

I hope it's a great weekend for all concerned.
Posted by Brad H. at 09:41 No comments:

It was a bright, sunny day in Canberra today. Just the perfect conditions for a leisurely little trip between Canberra and Bungendore behind preserved steam locomotive 3016. 3016 was built by Beyer Peacock in 1903 and has really stood the test of time with the NSWGR and then under the care of the ARHS (ACT) Division. 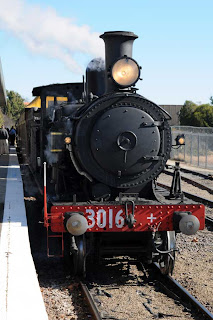 Above: 3016 awaits departure from Canberra station this morning on its trip to Bungendore and return

Our scheduled departure at 10.30am was delayed but it wasn't long before we were on our way. The smell of coal-fired smoke and the gentle rolling of the carriages make for a perfect way to watch the scenery pass by. Heading beyond Queanbeyan we got to see some beautiful vistas over a winding stream in a magnificent gorge. Although it's been dry around Canberra for a few months, there was still a good flow of water in the stream. Pine plantations gave way to rolling paddocks with the odd gathering of cattle or sheep. Between Queanbeyan and Bungendore the scenery jostled between hilly paddocks and lightly forested gums. It wasn't quite picture perfect but it was relaxing nevertheless.

Of interest to the railway modeller is the variation in colour and texture of the scenery. I realise that it's difficult in model form to match the subtleties and detail of the real thing, but I do think that such observations make it clear that colour, landscape, and vegetation are not homogenously ubiquitous.

En route to Bungendore we went through three tunnels, all of which provoked great excitement from the kids on board the carriage in which I was sitting today. I can say from the experience that it really is black inside an unlit carriage going through these tunnels!

We arrived in Bungendore where we had about two hours to have lunch and look around before the train left for the return journey. Precisely at 2.30pm the train left Bungendore (tender first) for the trip back to Canberra.

On the return, I paid special attention to the disused rail sidings at Queanbeyan. One set of sidings used to service the former Ampol oil depot. The Ampol depot is quite interesting because the buildings and some of the storage facilitites are at ground level, but the main railway line and oil depot siding is some way above this, necessitating piping up to the siding. Five large tanks were also above the oil depot grounds. The main unloading point still has the valves, as this photo illustrates, and you can see the steps leading up to them. 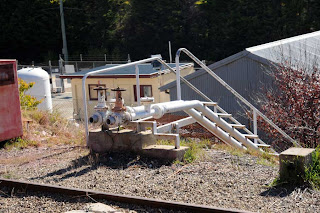 What remains in the actual depot itself is a small office and shed, and gas tanks, now occupied by Origen Energy. It all looked very despondent; quite a contrast to the halcyon days of rail freight traffic servicing this industry across the state of NSW. Similarly at Fyshwick in Canberra, I looked at the abandoned rail sidings servicing two large oil depots on the northern side of the tracks and the recently closed Shell depot (with Freight Australia oil tankers still in the loading bays) further down on the other side of the tracks. Modelling oil depots, even abandoned ones like the four I saw today, has a certain industrial charm (and even nostalgia) associated with them.

And then the train arrived in Canberra; the afternoon sun still shining in a blue sky but with the temperature becoming cool as the end of the day approached. I can certainly conclude by saying that rail travel like this on a bright sunny day is wonderfully relaxing. Thanks to the ARHS (ACT) Division for putting on the rail tour today and for their considerable work in maintaining the loco and carriages. I thoroughly recommend the trip to one and all.
Posted by Brad H. at 21:05 No comments: