Yes I know it's been almost four weeks since the NMRA Australasian Region Convention. And I know good blog practice is to be current and post regularly. Unfortunately, life gets in the way sometimes!

In this second and final instalment about the NMRA Convention 2012, I wanted to quickly go through some of the presentations. Then I will follow up with a few photos from a couple of the layout visits I managed to squeeze in on the Sunday afternoon before driving back to Canberra.

The convention opened with a short introduction and then a delay while some technical issues were overcome with the computer and projector. The first presentation was in the Main Hall and featured the planning and building of the fabulous Smuggler's Cove layout. I cannot avoid adding some more photos... 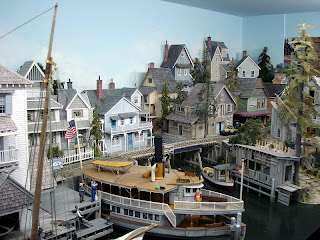 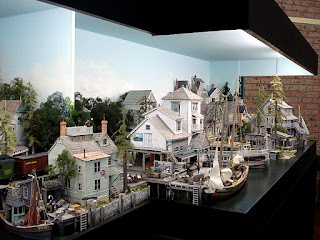 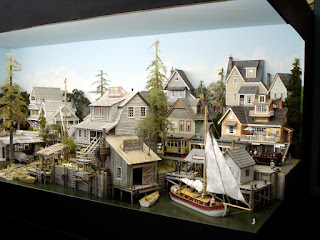 Geoff and Michael explained how they planned and designed the layout after a trip they both had to the New England area of the United States. They both saw potential for a new model railroad from the scenery and small fishing villages along the Maine coast. During the trip, which I understand was a holiday with wives and not a train research trip per se, Geoff and Michael took lots of photos, bought books, artist drawings, brochures, and post cards of structures and scenes. In other words, they collected as much info as they could! One rather expensive purchase (but well worth the expense) was the motif for the layout. 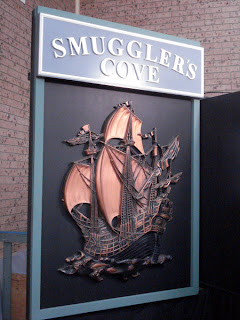 The photos and prints and post cards were used as inspiration for specific scenes and buildings on the layout. Construction took place from November 2011 to July 2012 when the layout was displayed at the Castle Hill Model Railway Exhibition. There is nothing like a tight time frame to concentrate the mind and the effort! The layout as presented was in two modules, but there is a third module to be finished and added to the layout. That should be worth the wait.

After this introductory session, the next session had three options - "From the beginning", Planning your layout", and "Scratchbuilding in styrene". I went to the session on planning your layout which was given by Sam M. from the Central Coast. I wanted to go to the scrathcbuilding session too but I was able to spend time with John B. at his modelling desk later in the day. Sam went over some basic but important considerations to work through when planning a layout: for example, determining standards for the layout (layout height, size, aisle width, track radius, train length, purpose, etc.).

After a break for morning tea, there were more concurrent sessions. I went to the sessions on spline roadbed and plastic structures beyond the box. Bob B. gave a great presentation and demonstration of building spline roadbed using 6mm MDF cut into 20mm wide strips and hot glued together, using short spacers between each length of MDF until a 30mm wide spline was created (for HO scale). The session on plastic structures from Kelly was also very interesting, especially painting to take the plastic sheen off the buildings.

The afternoon sessions comprised adding fine detail, route control for tortoise point motors (an excellent presentation from Erik B.), and another instalment from Geoff and Michael (on structures, boats, water and scenery). Let me quote from their notes about the way they construct their buildings:
Every building has a cardboard sub – structure. Thick card was cut to match the plan then tacked together to check dimensions and visual effect. Problems were corrected, the card recut if necessary, then window and door openings cut. In most cases timber bracing was added as re-enforcing to corners, sides and roofing. We used a combination of Outback Model Co. , Grant Line , Atlantic Scale Models and Tichy windows and doors. Different siding and roofing materials were then laminated onto the card sub- structure. These included Artists coloured card, commercial wall and roofing printed card sheeting as well as basswood and balsa. The card and printed sheeting, once applied , was given a sprayed coat of artists fixative or matt finish to help preserve the surface.

On the Sunday there was a general presentation in the Main Hall from Sowerby S. on layout lighting, followed by a David O'H. presentation on detailing Australian rolling stock kits (pay attention to the prototype using photos or direct observation!).

The clinics and formal presentations finished late morning, although one might have been forgiven for wondering if there really was a finish to the day since no formal closing session was provided. We just mulled around the hall until we realised that that was all folks! It was a disappointing conclusion for the convention which, despite some technical and noise issues at times, was interesting enough.

After grabbing some lunch at a local takeaway outlet, I went to check out four layouts - all of which I had seen before when I was living in Sydney and a regular attendee of the NMRA Division 7 (NSW) monthly meetings (that included the Central Coast).

The first layout I went to was Dennis C.'s HO scale NSW layout based on Barmedman. The layout was in a new home, this time inside the house instead of the garage. I like this option! Dennis is a very good kit builder and has built a number of white metal NSW steam locomotives for me in the past. More information about the layout can be found from this website link. 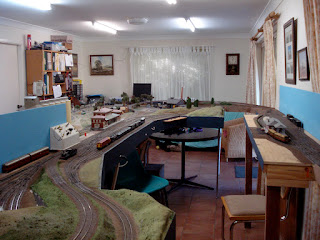 The second layout visit I made was just up the street at Sam's place. I really like this layout because of it's operational focus. To give you an idea of the layout plan, the control panel schematic will do nicely, but more information can be found from this website link. 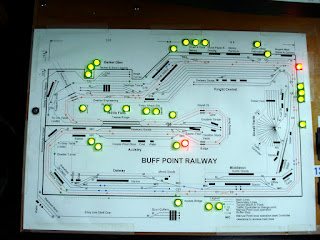 The third layout was just around the corner at the home of Rowan M. (recently elected VP of the NMRA Australasian Regional Committee). Rowan's layout is ambitious to say the least - an HO scale model railway based on the Main South Line in NSW from Sydney to Junee! A sample view of just one "corridor" should give you an idea of how such a large endeavour might look. More info from this website link. 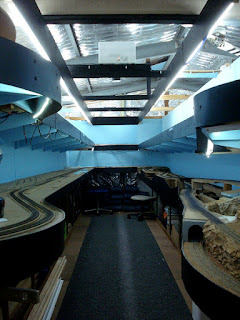 The final layout for me on the day was the Great Northern Great Falls Division by Gerry H. The layout is beautifully presented. The operation and scenery are exceptionally well done. You can read and see more from this website link. Thanks to Gerry and his wife for the lovely afternoon tea as well - got me through the drive back to Canberra! 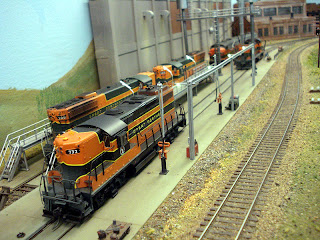 And, let me conclude with a beaut little layout that was also on display at the Convention. The layout was  called Lizard Ridge (On30). 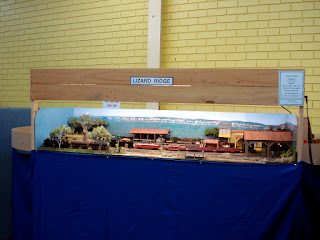 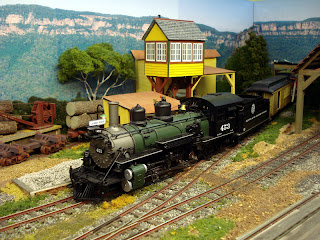 I enjoyed the weekend and the limited amount of layout tours I could manage in an afternoon. Next year the Convention is being hosted by NMRA Division 2 in Canberra.....hey, that's my mob!

I spent an enjoyable weekend on the Central Coast of New South Wales at the Australasian NMRA Convention. The Convention had the usual array of presentations, modelling clinics, and layout tours. Models were on display for assessment for the NMRA achievement program awards. A handful of layouts were also on display; the feature being the latest modelling creation from Messrs Flack and Nott - Smuggler's Cove.

The Smuggler's Cove (On30) layout was presented in a similar style to previous layouts from this partnership. Smuggler's Cove is essentially a set of two joined dioramas with a couple of trains running through them. A third portion of the layout is still to be added. The layout was first exhibited at the recent Castle Hill Model Railway Exhibition in Sydney. The NMRA Convention was fortunate to not only have the layout on display, but to have Messrs Flack and Nott give two presentations on the design and construction of the layout.

Smuggler's Cove is a fictional location in Maine in the New England region of the United States. The model features some superb scratchbuilt structures and magnificent detailed scenery. The layout lighting and general presentation are superb.

The following photographs of Smuggler's Cove show just a taste of this superbly displayed layout. 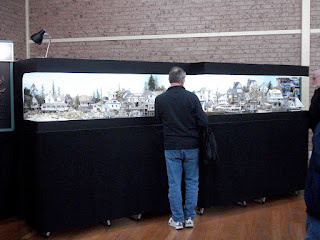 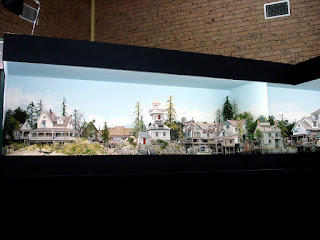 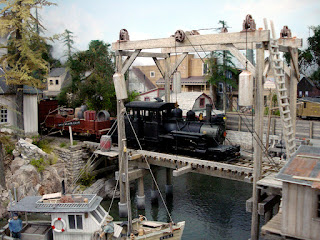 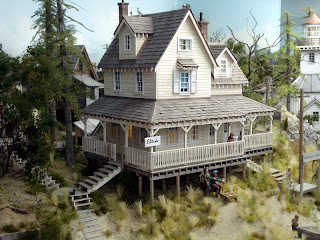 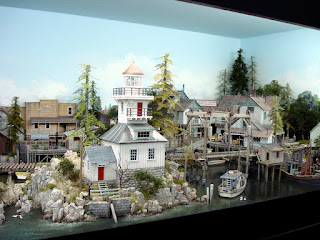 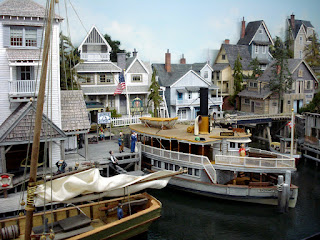 I will have more to say on the Convention in my next blog post but I wanted to give you a taste of the weekend with some photo's of the Smuggler's Cove layout.
Posted by Brad H. at 21:24 1 comment: