Armchair Modeller Down Under was fortunate to have a special correspondent at the New England Model Railway Club Convention last weekend. Here is his report on the event:

On the weekend of 6-7 November in Armidale (NSW), the New England Model Railway Club (NEMRC) held its third model railway convention. The previous two conventions in 2001 and 2005 had been held at Ebor. Some 85 or so modellers from as far away as Canberra, Sydney, Melbourne and Biloela (Qld) enjoyed a fantastic weekend.

Registration commenced on the Friday evening (5th November) so that by starting time on Saturday most people had been signed in without a fuss. The format provided plenty of opportunity for modellers to keep themselves amused.

There were eight presentations, each of one hour length, delivered on each day of the convention. The presentations were held concurrently, so you had to choose which of the two talks you would listen to. The presentations were repeated the following day so that there was an opportunity to go to all of them if you wanted to. The presenters included Gerry Hopkins (DCC control and Decoder Pro, and also DCC friendly locos, turnouts and accessory decoders); John Brown (Scratch building in styrene); Howard Armstrong (Rail tank cars in NSW); Dean Bradley (Weathering with a heavy hand); Laurie McLean (Lights, sounds and action); Peter Street (Modelling oil depots); Stephen Ottaway (Fettlers’ transportation), and Gary Ible and Warren Herbert held a layout planning forum.

If the talks weren’t of interest, there was plenty to do in the main hall. Participants were encouraged to bring a model to put on display and the result was an impressive and diverse array of models that took up six or so tables. Also on display were two modules of Exeter Bank, the exhibition layout started by the late Rodney James. The first and last showing of this layout was at the Brisbane exhibition some 5 or 6 years ago. Also on display was Bowen Creek, the P87 layout of Ian Millard and Andrew Campbell - a brilliant portrayal of a simple intermediate station on a line in country NSW. It was great to be able to examine the workmanship of these layouts without the constraints of barriers and crowds, as is the case at exhibitions.

There were a series of modelling demonstrations that ran over the weekend. Len Durkin gave a clinic on how to use Fast Tracks jigs to build turnouts; Rhett Herbert showed how to kitbash a better looking bogie sheep van, while Peter Boorman demonstrated soldering. Jim Pullen gave a clinic on modelling poplar trees that provided attendees with the opportunity to actually build their own trees if they wanted to. Dean Bradley, John Brown and Gerry Hopkins gave clinics to support their respective presentations. This format gave people an opportunity to get a better understanding of the topic they discussed in their presentation.

The commercial sector was well represented by Gwydir Valley Models, Peter Boormans Workshop and AR Kits. On the Saturday afternoon, attendees were able to visit three nearby layouts in club members’ homes. In the main hall a slide show through a data projector ran over the whole weekend.

Not to be underestimated was the opportunity to socialise with other modellers in a very open and relaxed atmosphere. This extended to the dinner on Saturday night which featured John Thompson (author of books on the 36 and 38 class locos) as an after dinner speaker. Everyone appreciated John’s thought provoking oratory on how modelling railways can contribute to having a great life.

It seemed that there was an endless supply of lucky door prizes handed out over the weekend, reflecting the effort that the organising committee put into the event. For those who didn’t have to get away in a hurry and wanted even more; after the convention had ended on Sunday afternoon an opportunity was provided to check out the NEMRC clubroom near the Armidale railway station and to inspect the restored station building at Dumaresq.

The NEMRC organising committee are to be congratulated on delivering an excellent weekend. They have set a standard that organisers of similar events will have to try extremely hard to match.
Posted by Brad H. at 08:48 No comments:

Photos from the Wagga Wagga MRE

As I said in my post last night, there were several layouts of interest on show at the Wagga Wagga Model Railway and Hobby Exhibition over the weekend. I have managed to upload some photos this morning into Blogger and here is a sample of the layouts from the exhibition.

The first four images are of the Tumut/Gilmore layout. 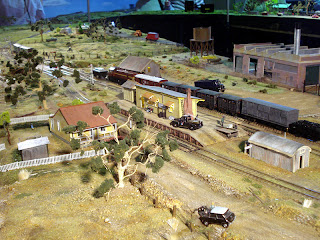 The above photo shows the view looking across Gilmore station. And the shot below shows a 49 class shunting the goods shed siding at Gilmore. 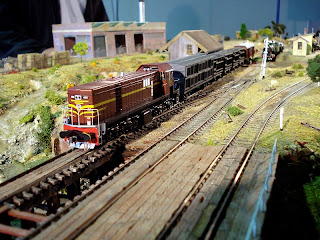 The next two photos are of Tumut. The first photo shows a CPH railmotor easing into Tumut station. The second photo shows the yard with one siding curving off sharply to service some industries along the roadside. 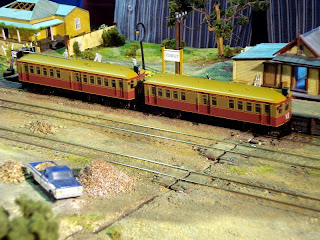 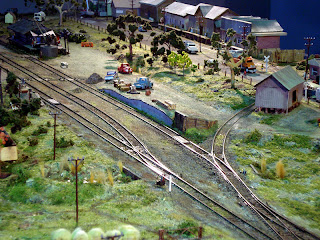 The next photo is of Eskbank station on the circa. 1899 Eskbank layout. The station building is quite a work of art. 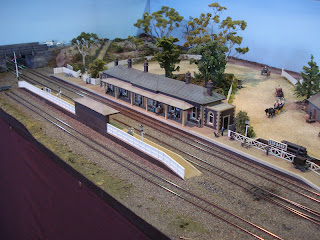 The next photo shows the G scale layout, Leonville Junction. 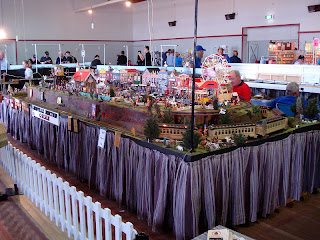 A layout still under construction is the Boorawa part of the Galong/Boorawa layout. In this photo a mixed goods is departing the yard at Boorawa. 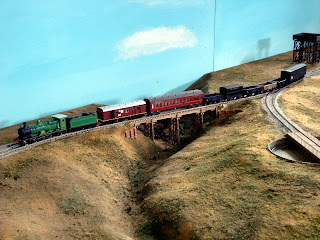 And lastly, from the Brisbane Water layout, we have a 10 class steam loco with crane picking up coal from the S wagon. This little loco buzzes back and forth throughout exhibitions and must have done hundreds of scale miles by now given the number of exhibitions this layout has appeared at over the years. Nevertheless, there is always something of interest to see on this Brisbane Water layout, a testament to the quality of the layout through all these years. 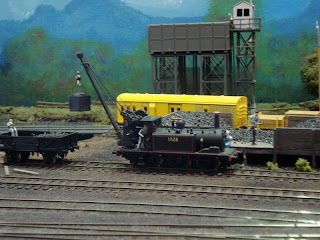 The 11th annual Wagga Wagga Model Railway and Hobby Exhibition is over for another year. I hadn't been for a few years but when a mate suggested we drive down to check it out, I thought "why not?".

So I went down to Wagga Wagga by car with Andrew Rosenbauer yesterday. The drive down was also a good excuse for some prototype rail photography too. We saw triple NR's at Binalong, a pair of 81's on an empty grain train at Harden, a CPH rail motor pair at Junee departing for Griffith, and  8173, L270, and 8109 on an empty sleeper train arriving at Junee on the Up. Not bad for a morning's drive down south!

I hadn't seen the Tumut/Gilmore layout before and I was quite impressed. The layout depicted the stations and yards at Tumut and Gilmore on the branchline from Cootamundra. The scenery was well done with a good blend of colours depicting the grass and vegetation, while the structures supported the railway yards very nicely. Having visited Tumut many times over the past fifteen years, it was good to reflect on those past visits while watching the trains working between the two stations on the layout. A nice touch was a spiral-bound booklet with information explaining the planning and construction of the layout; very interesting indeed.

There were also a number of commercial stands, including Aust N Rail, Chuck's Ballast, Kerroby, Pallas Hobbies, Runway 13, and Trainworld. There were also a couple of traders selling books and secondhand items. However, my purchases were quite modest: three pairs of KD #148 couplers and a book by Lloyd Holmes about his life on the railway.

A feature of the exhibition is a modelling display based on a small diorama. There were about six entries this year - all showcasing small railway scenes to good effect. However, I was disappointed that the dioramas were in (or on) a display case in a very poorly lit area of the hall. It was hard to see all the detail and the work in these dioramas to full effect. However, I understand that John Harriott won the competition while Phil Skelton and Mick Davis also had commendable displays.

The exhibition again was a chance to catch up with friends from the local area and also from Sydney. Travelling the exhibition circuit certainly is a social occasion! The day was pleasant enough, although the drive back was a tad boring as we took the Hume Highway back to Canberra.

I'd like to finish off this post with some photos from the exhibition but I am having a problem uploading the images into Blogger. I'll try again tomorrow night.
Posted by Brad H. at 21:27 No comments:

How much prototype is enough for Australian HO?

There has been an interesting exchange of opinions on one of the model railway listservs recently about HO scale models and accuracy to the prototype.

The focus of the discussion was the NSWGR S truck. However, the debate is relevant to all models of Australian prototype. But I want to concentrate on HO scale models for the time being, given the size of this market in Australia and the focus of the manufacturers to produce models to this scale.

I believe that HO scale model manufacturers in our hobby are committed to making their models as accurate as possible to the prototype. However, there are likely to be commercial and production considerations that make concessions to prototype accuracy necessary. These considerations might include the cost of production, the ease of construction during the production process, generic prototype fundamentals over individual prototype specifics, and whether detail items may actually be too fragile for the expected model railway use.

On the demand side of the equation, we hear that modellers want their HO scale models to be accurate to the prototype. We sometimes hear major debates about whether the sill detail is a scale 1 inch too wide on the model, or whether all the detail rivets in the undercarriage have been reproduced to "scale" thickness. On the other hand, models that have a number of omissions or errors are quite rightly criticised. But these are all value judgements.

The Australian manufacturers sourcing product from the factories in China, as well as a bevy of local "cottage industry" producers, all face the same scale-prototype dillemma - how much accuracy should be provided?

Austrains tries to make some differentiation between the level of detail accuracy with their basic (Basix) range and their more detailed "standard" models. This strategy is probably a good one. I do wonder, however, whether a significant portion of the buying public really care, and just purchase models based on the availability of their favourite or needed models.

Interestingly, I suspect that all scale model hobbies face the same issue: a commitment to produce accurate models with reasoned concessions to accuracy when applicable. For example, a few railway modellers I know have a penchant for model tanks. There are highly detailed plastic kits of model tanks in 1:35 and 1:72 scale, as well as a range of supplementary super detail items including turret assemblies and tracks.

The issue therefore becomes to what level of detail and prototype accuracy is required by the market (and the market is segmented to include collectors, rivet counters, "average" modellers, etc.) and what does this mean for the manufacturers who produce for this market? Should model railway manufacturers keep striving for even greater scale accuracy if the retail cost rises considerably, or the model becomes too fragile to handle? Is there an acceptable standard for prototype accuracy that could be enhanced with super-detail parts supplied by third party manufacturers?

I'd be interested in hearing from modellers and manufacturers what they consider to be acceptable tolerances for HO scale railway models based on the prototype, keeping in mind the differences in individual modeller's wants and the market realities in which the manufacturers operate within.
Posted by Brad H. at 14:17 10 comments: