For me, the Labor Day October long weekend is synonymous with the Sydney Model Railway Exhibition at Liverpool. And so it was that I made the 2.5 hour journey from Canberra to Liverpool for this annual exhibition.

I had purchased my ticket online in the preceding week. However, when I arrived around late morning on Saturday the general admission queue was very small. Nevertheless, I gained entry straight away and made my way around the perimeter of the main hall. The majority of the trade stands occupied this space and so my circumnavigation took a wee while as I looked for new products, examples of pre-production models, and any bargains. Austrains and Trainorama seemed to have some decent specials, and I think Southern Rail Models may have had some discounted L class locos, but that was pretty much it as far as I could see. The SDS Models upcoming Speed-E-Gas tanker was on display and looked terrific, as did the selection of models in the showcases from Auscision and Bergs. Other notable commercial stands included Orient Express from Adelaide, Runway 13 from Canberra, ARHS books, Anton's Trains, Casula Hobbies, Chucks Ballast, Railroad Model Craftsman, Train World, Kerroby Models, Eureka Models, Pallas Hobbies, and IDR Models.

As for the layouts, there were about 25 or so. Most of the layouts I had seen before, but that shouldn't surprise as I have visited quite a few exhibitions over the years.

Here are a few representative layouts from the exhibition.

Upon entering the exhibition, there was the familiar live steam Railways in the Garden layout. The railway uses two gauges of running tracks - 45mm and 32mm - and the locos are fired by either gas, methylated spirits, or coal. 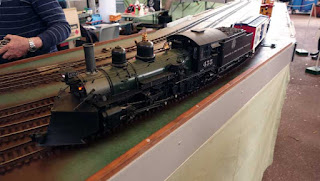 Bethungra Spiral (HO, NSW) from the Epping Model Railway Club was on display and the scenery looked superb. This layout offers a different design to the usual exhibition layout which are mostly based on station and yard scenes. 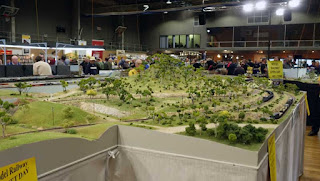 Yendys (HO, Australian) made the journey up to Liverpool from Canberra. This layout has been around the exhibition circuit quite a while now. I love the composition of the layout, and the bridge scene is always a stand-out. Colour light signalling had been added this time around. 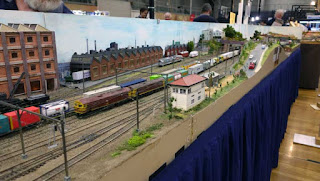 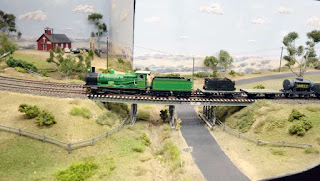 Mungo Scotts (HO, NSW) has also been on the exhibition circuit for a while now. The layout was built and is exhibited by the Sydney Model Railway Society. The photo below shows a Beyer-Garratt locomotive on the Metropolitan Goods line with a run-through train. 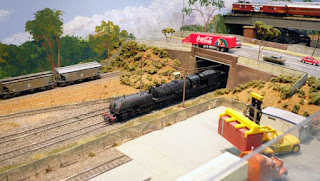 Goulburn (HO, NSW/Australian) from the Guildford Model Railway Group, was making its second exhibition appearance. This layout has proved inspirational to a couple of my model railway friends; something that makes attending exhibitions worthwhile. The photo below captures the Sydney-bound XPT about to depart Goulburn railway station. 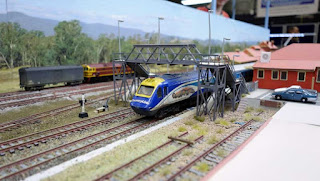 Waterfall (HO, NSW) from the Illawarra Model Railway Association, was tucked away in an annex off the main hall (across from SDS Models). This layout is a quality exhibit and features some great scenery, especially around the station precinct. 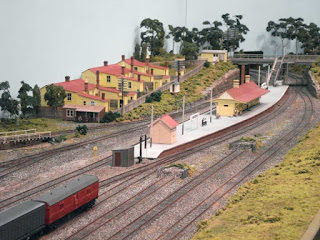 Broxburn Sidings (OO) was also off the main hall. This layout is a lovely compact layout featuring industrial sidings with plenty of opportunity for shunting action. 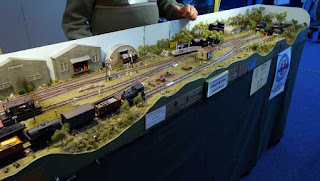 Kyogle (N scale, NSW) from Peter Boorman was a nicely crafted rural NSW layout featuring a station, yard and bridge scene. This layout will be featured in the December 2016 issue of the Australian Model Railway Magazine. 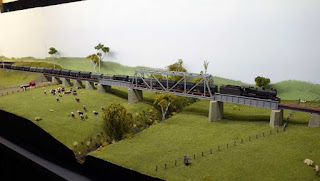 Dunblurtin (N scale, NSW) was first exhibited by its previous owner way back in 1990! This layout has stood the test of time with some nice scenery, buildings, and plenty of train action. 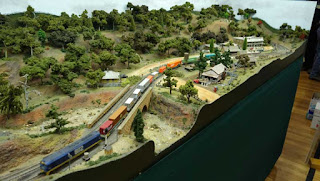 Industry Lane (00, British) was my favourite layout from the Epping Model Railway Exhibition in June. It remains one of my favourite layouts. This layout demonstrates that you can still have a great model railway even in a relatively small amount of space. The buildings and scenic composition are superb. More information about the layout and the community group can be found at the following web address: www.platform1mrc.com 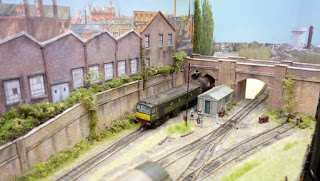 Another small layout, this time in G scale, was Whiskey Springs. This layout was a highly detailed logging-style model railway that featured exquisite scenery. 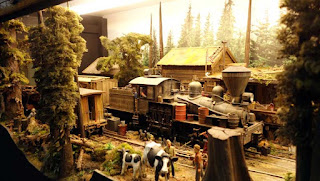 Valley Heights (O scale, NSW) is another layout I have seen before. This time I paid particular attention to the roundhouse (instead of the elevated coal stage which probably gets more than its fair share of attention). The roundhouse has great atmospheric charm generated from the larger modelling scale. 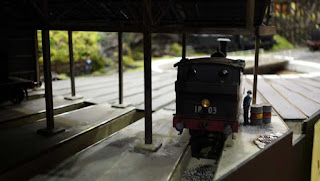 While many of the layouts I had seen before, I still enjoyed the exhibition and catching up with fellow modellers from Sydney, Canberra, and rural NSW. As Canberra does not have a dedicated model railway shop, the Liverpool exhibition was a great opportunity to check out a wide range of retailers all in the one spot. Sometimes modellers don't always appreciate the convenience of having a large range of commercial retailers all in the one place at the one time. That said, I do wonder whether there are sufficient new layouts being constructed to keep exhibitions fresh and engaging for both the public and for existing railway modellers. Perhaps this is a topic to keep for another time...
Posted by Brad H. at 21:13 3 comments: