A couple of weeks ago over the Easter weekend, I attended the New Zealand Model Railway Convention in Christchurch. The convention was held at St Andrews College not far from the centre of town. The international guest speaker was Iain Rice from the UK.

Iain was certainly well used by the convention organisers. He spoke on all three days of the convention and visited many home layouts open for layout tours over the weekend. On the first day of the convention (Friday 2nd April), Iain spoke for almost two hours (with a short intermission) about his experiences with model railway layouts over the past 50-odd years (wow, is it really that long?). Iain's presentation was accompanied by some great layout photos from most of his layouts over that time and shown as Powerpoint slides. But this was certainly NOT death by Powerpoint - the images illustrated what Iain had to say perfectly.

Iain started off by telling us about some of his early layouts (e.g. East Suffolk Light, Tregarrick, Woolverstone, and Leintwardine which was built for the Model Railway Journal Show in 1991). Of particular interest to me was the thinking behind each of his layouts, and why some things worked and some things didn't. Iain also enjoyed describing the pros and cons of building white metal locomotive kits from a range of manufacturers in the UK; some harder to put together than others! The upshot is that experience is indeed a good teacher.

One of Iain's more recent model railway layouts is the diorama-like Trerice that depicts the china clay industry in North Cornwall. The layout, in P4, was initially only 6' 7'' long. Iain has since redone parts of the layout to increase operational interest. Trerice is "based on the same convenient fiction that spawned Tregarrick - a mixture of Bodmin and Wadebridge and Cornwall Minerals with a touch of North Devon and Cornwall Junction thrown in". I really liked the way Iain fictionalised a believable history on which to base his model railway; yet selecting practical and personally preferred aspects for the model that he wanted to bring to the layout. The blending of history and fiction for constructing context around a model railway layout seemed to have come naturally to Iain (perhaps a reflection of his theatrical side) which is rather a nice compromise really.

Iain also explained how he displays his exhibition layouts at model railway shows. To get a layout up to eye level for adults (about 58-odd inches if I remember correctly), he stands his layout on a portable table! All in all, it was a very informative and entertaining session.

On the Friday I also went to a presentation on weathering by Stan Agar and a workshop session with a number of demonstrations (the three from five offerings I went to were figure painting, custom decals, and building turnouts). The key message from the presentation on weathering was to refer to the prototype for good examples from which to copy or take ideas from. Stan uses a rather high 40psi for airbrushing, but also favours hand painting a mix of paint and powders for a good "grunge" look and feel. Humbrol enamel paint No.29 was recommended for washes, as was alkyld paint for relatively fast drying (2 days) applications.

The afternoon session concluded with a presentation of digital "slides" of Eric Brooman's famous Utah Belt model railway. The take-home from that presentation included the following:
1) avoid clutter and too many structures on the layout
2) produce typical scenery rather than unique (more believable)
3) staging is paramount
4) design for prototype operation
5) narrow shelves are effective with good backdrops to give depth of field

And in between the sessions there was time to chat and look at the layouts on display in the main hall. The people at the convention were exceptionally friendly and helpful - thank you, I really appreciated it.

I have included a couple of layout photos to whet your appetite for the next (belated) instalment.

The first three photos are taken of the large modular TALMR layout (NZR, 1:64 scale). David Low would certainly be happy with the buildings on this layout - superb stuff! 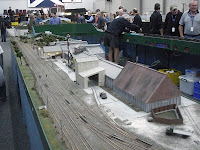 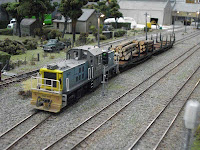 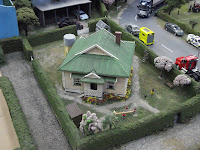 The next two photos are from the S scale (1:64) NZR layout, Arauatu. 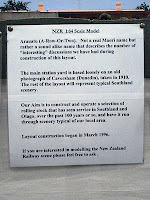 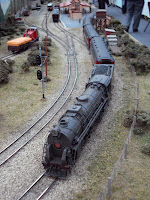 Finally, there was a model competition at the convention. My favourite was this diorama of a New Zealand factory scene built by Mark Dalrymple. 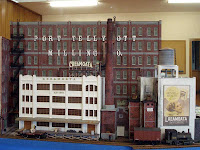