The mystery and subtlety of weathering

Last Friday I drove from Canberra to Sydney for a work-related meeting in Hornsby. When I travel to Sydney for the day I usually take the Exeter turnoff from the Hume Highway for breakfast at the Exeter Post Office cafe. This trip was no different. I can heartily recommend the turkish toast with butter and vegemite!

Of course, this route off the Hume Highway means one continues north from Exeter to Moss Vale and Berrima before rejoining the Hume Highway and onwards to Sydney. Taking this route means there is a good chance to see a train or two roll through this part of the Southern Highlands. I only saw one train at Moss Vale but I did see some shunting in the sidings of the Berrima branch, near the large Omya factory complex. The branch here feeds the huge Blue Circle cement works at Berrima and the Ingham stock feed factory (grain). This means there are usually plenty of grain and cement wagons in the sidings.

Now I don't usually stop to spend much time looking at these wagons but on this trip the road that takes you to the highway was closed, meaning I had to turn around and find a detour. A train was shunting some cement wagons behind a stationary set of grain hoppers and I watched this for a few minutes before I suddenly realised what a wonderful example of weathering was in evidence on the NPRY cement wagons.

My weathering antennae is very sensitive at the moment because a fellow railway modeller in Canberra has turned his attention to building 1:35 scale WWII tanks (I think it's just a phase he is going through). And this chap has been despairing at the sheer brilliance displayed by military modellers who have weathered tanks so realistically and in such fine detail. The many different weathering methods for tanks abound in military modelling magazines and the brilliant AFV DVD on acrylic techniques. I bought my copy of the DVD from Crusader Trading  in Fyshwick, Canberra, to see how it would work with model railways (Answer: yes it would work, but you'd never weather your fleet of rolling stock to this detail in a lifetime).

Anyway, if you're up for the challenge, here are a few quick photos of these cement wagons. The weather was overcast which wasn't great for photography but you'll get the picture. Just have a look at the different shades, textures, and general grime on these wagons. I doubt I could do justice to these examples in weathering my four AR Kit HO scale models of the prototype. The critical points of weathering interest, IMHO, are the subtle variation in shades, the peeled surface texture, and the streak marks. 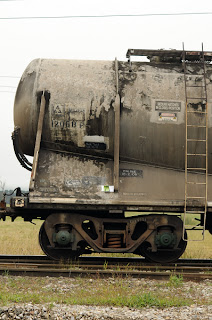 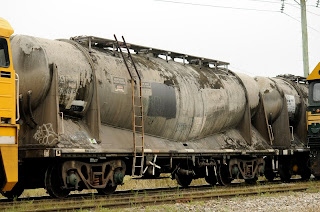 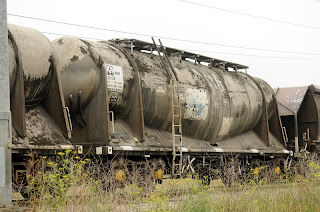 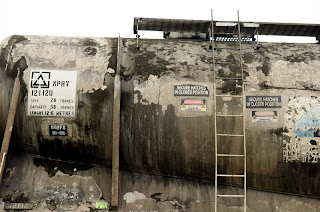 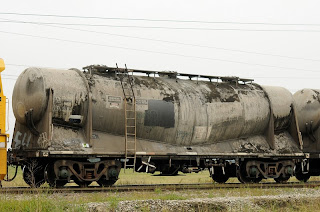 I wouldn't mind seeing Mr Mig Jimenez having a crack at one of these cement wagons with his weathering techniques...now that would be something worth waiting for.
Posted by Brad H. at 22:06