It's been almost ten days since I attended the Modelling the Railways of South Australia Convention in Adelaide. Whilst I stayed on in South Australia for three days after the Convention, it has still taken me another week to get in front of the computer to pen this short post. I trust Les will forgive me!

The Convention was again held at the Flinders Medical Centre. I travelled to the venue by bus from the Adelaide CBD which is a comfortable and convenient ride. The Convention once again lived up to expectations with a series of interesting presentations and a wonderful model display that showed the best of South Australian railway modelling. This diorama is an impressive example. 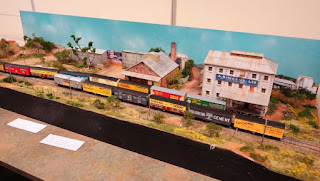 In addition, the beautifully produced and comprehensive package of notes accompanied the presentations. The Convention notes provide a wealth of detailed information. In fact, as was stated during the day, the notes from these Conventions represent a massive resource of historical and contemporary information about railways and railway life in South Australia.  All present recognised this and warmly thanked the production team for another year's worth of quality information. My notes from all the Conventions I have attended comes to six volumes of very full-looking 3-ring binders which is an impressive collection of unique information.

Back to the Convention: A number of commercial stands were present throughout the day, including Orient Express Model Railways, Ozrail, End of the Line Hobbies, and Train World.

The day ended with the usual raffle draws and associated prizes. I once again failed to win anything despite a modest investment in tickets. Better luck next year!

Thanks to the organisers and to the production team publishing the Convention notes. I very much look forward to the Convention in 2017 (likely to be again the first Saturday in September).