It's hard to believe that three weeks have gone by since I was in Auckland, New Zealand, at a model railway convention. The New Zealand Association of Model Railway Clubs (NZAMRC) 2018 Convention was held in the northern suburb of Auckland, Takapuna, at the North Harbour Netball Club's indoor centre. It was a very well organised affair - thank you to the North Shore Model Railway Club for organising and hosting the event. And thank you to everybody who made this visiting Aussie feel very welcome. 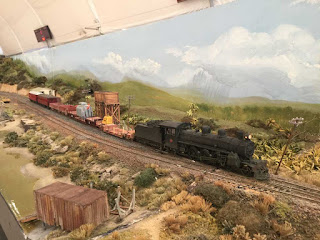 Photo: A scene from one of the layouts at the convention centre showcasing NZR in S scale

The convention hosted four layouts at home base but the space available at the indoor netball centre could have housed five times as many!

Friday 31st March was the first day of the convention with clinics held in the morning. The two clinics I attended were both excellent.

The first was by Robert Douglas on "Operations on the Kayton and Tacoma Railway" about his HO scale US layout housed in a rather small garden shed. That did not stop Robert from presenting an interesting operational setup for his layout. He uses two-position car cards and waybills on a layout that ostensibly moves freight cars from one side of the layout to the other. A typical op. session moves around 36-40 cars within a 90-120 minute time period. A feature of the op. system is the use of randomised freight cars to provide added interest. Robert also spoke about how he compiled an inventory of industries and their respective loads in and out, thereby providing information on the types of freight cars needed. Loads also respond to seasonal variations.

The other clinic was from noted NZR modeller, Trevor James. I had seen Trevor's layout at the corresponding NZAMRC Convention four years ago in Hamilton - a terrific NZ S scale layout. Trevor's presentation was about building a medium sized NZR home layout. Trevor believes in the 3' rule - the detail on the layout is as good as viewed from three feet away. He emphasised that in the planning phase it is important to determine what you want from the layout - what standards you will be comfortable adhering to and what features you want to incorporate on the layout.

After lunch, the afternoon was filled with layout visits. I was very lucky to have met Brent and Neil the night before at a local pub, so Brent and Neil kindly included me in their car as part of the car pooling arrangements. Many thanks, chaps! I include photos of several layouts I saw over the weekend at the end of the report.

The second day had a similar program with clinics in the morning (Peter Ross on DCC sound, and Arthur Hayes from Brisbane with his talk on "Conveying goods/freight on your layout"). The layout tours were in the afternoon. Again, Brent kindly chauffeured four of us around with plenty of entertaining banter as well as some unofficial sightseeing of a former NZ airbase (now a housing estate) where Brent had once lived and worked.

On Sunday, the third day, there were more clinics in the morning (Part 2 of Trevor James' talk about his layout, and Philip Sharp's enormously interesting "Modelling the Owen Sound Sub' in the 1870s and 1890s"). Trevor's focus was on operation in this clinic. Trevor explained the operations on his home layout. He uses the software program ShipIt to generate switch lists. Essentially, trains started from double-ended three track staging area.  The two trains leave staging in opposite directions and work their way around the entire layout on the single track main until reaching the corresponding station at the end of the layout (the two end stations are also connected by the ends of staging). The locos at each station are turned, or dropped for a new loco, and then the op. session really begins as now the trains and their freight cars move back through the layout performing all the switching moves at intermediate locations along the way. Philip's talk was a fabulous historical journey, with photographs, of the railroad that began as a narrow gauge line known as the Toronto, Grey and Bruce Railway. It soon fell into financial problems and was taken over by the Grand Trunk and converted to standard gauge, and then in 1883 the Canadian Pacific Railway (CPR) took control.

In the afternoon the prototype tour was a visit to the Museum of Transport and Technology (MOTAT) in Western Springs, Auckland. This was a great afternoon as we had a tour through the railway section, getting up close and personal to an array of historic locomotives as the photo directly below shows. We also had some time in the aviation section as well, before heading over to the technology section by (Melbourne) tram to see a number of exhibits including the superb Auckland Pumphouse. 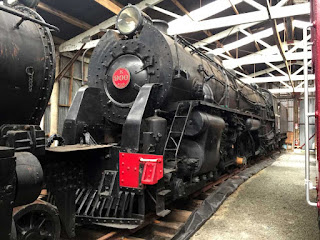 The layouts all had something interesting to showcase and I very much enjoyed the experience. And now, the photos and some description from the layout tours - apologies if I have missed anyone.

The first layout visit was to the home of Gerard Y. who was an amazing gentelman with a great memory for the history of Auckland and the railways (and he also has the neatest - as in most tidy - workshop/garage I have ever seen). Gerard's O scale layout showcased locomotives and rollings stock that he had built from scratch in the 1940s and 1950s. If the Auckland Public Library local history librarian is reading this; get over to Gerard's place and do an oral history as he has some great stories to tell. 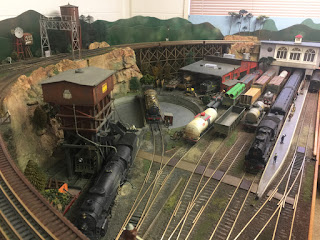 The next layout was a NZR S scale layout based on the Greymouth to Otira line on the west coast of the NZ South Island. This was a high quality layout with some superb scenery. According to those in the know, the layout certainly gave that unique Greymouth scenic experience. 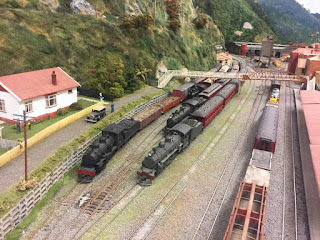 The HO scale US layout called the International Falls and South Western Railroad was housed in a double-garage, plus extension in an adjacent room. The layout was terrific, featuring operation with track warrants, car cards and waybills. As the layout was largely set in Minnesota, it really had a strong appeal to me. 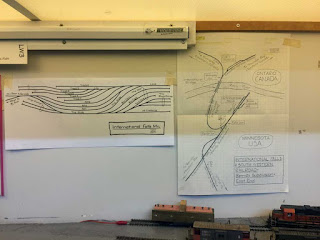 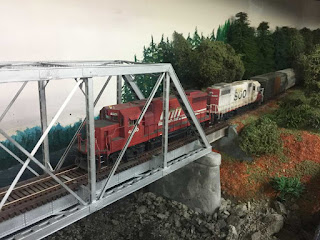 Another US prototype layout was the freelance HO scale Pacific Western. This was a very nice layout featuring lots of interesting industries, including a sawmill, cold store, flour mill, grain elevator, and cement and aggregate dealer. 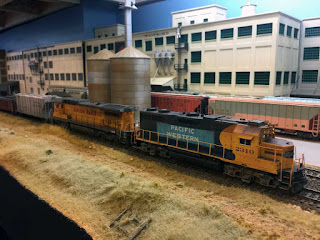 Trevor C. had a fantastic 9mm scale NZR layout featuring both steam and diesel action. The layout is inside a large purpose built room,16m x 7min size, but with plenty of room for people to move around, as well as the trains. The layout is based on the Taihape loco depot and main North Auckland line between 1950 and 1990, giving plenty of scope for a range of locomotive classes. 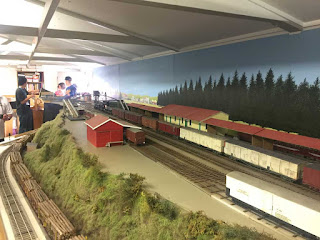 John R. also had a very large layout, 20m x 7m. This HO scale layout was set in the US Rocky Mountains in the steam-diesel transition era. There were plenty of long trains in operation, as well as a bevy of locomotives in yards and around turntables. 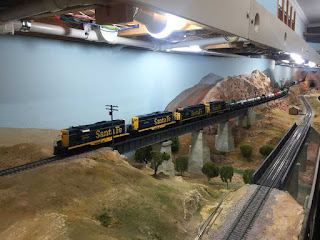 Neville C. had a beautifully scenicked S scale (1:64) layout with full interlocking control. The NZR layout is based on the North Auckland line from Swanson to Waitakere. The layout was contained in what looked to be a single garage and therefore demonstrated you don't need oodles of space for a great layout. 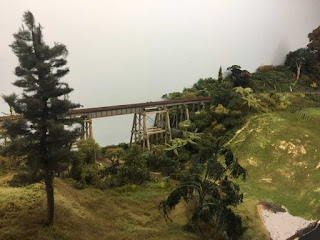 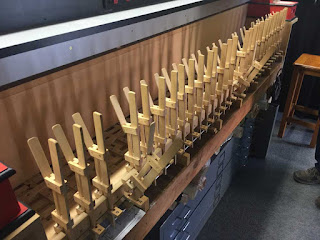 Graham D., a man with a talent for the electrics side of the hobby, ended the second day with his S scale NZR layout. The layout fits into a room 7.5m x 3.5m. The layout is based on the Wellington area and the Johnsonville branch line. In keeping with the owner's skill set, the layout features working signalling, building lights, night scenes, and automatic running. The scenicked areas are pretty good as well. 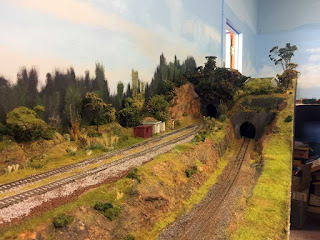 I thoroughly enjoyed my time at the Convention, especially meeting a great bunch of people and sharing some fun times. I recommend the Convention to all railway modellers. The next convention is in two years time in Christchurch.
Posted by Brad H. at 22:43