At this time of year I always reflect on my own childhood and the sense of wondrous expectation Christmas used to bring. And from one of those Christmases came a lifelong passion for model railways that has rarely diminshed over the (many) following years. On this particular Christmas Day I received my first train set - a Tri-ang Transcontinental passenger car set (RS.34). 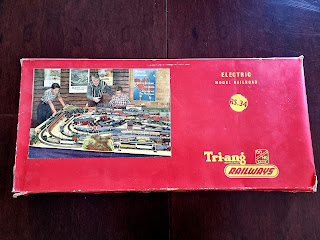 Dad and I set up the track on the carpeted floor of the lounge room and had hours of fun just watching the train with its blue and gold passengar cars rotate around the oval of track (which I think at the time was called System 4). Having already been exposed to the real railways on some steam tours and the odd photographic expedition with my father, as well as dad's collection of "Railway Transportation" magazines, I imagined the train to be the wondrous Spirit of Progress in all its glory. It made no difference to me that the models were not great replicas, or that the scale and coarse track profile were not prototypically accurate. I let my imagination take over and that was it. I added to that train set growing up but never really had a permanent layout while living with my parents (albeit my dad had a plan to have a lift up layout on pulleys above the car in the garage at one stage that never came to pass).

In my teens I was exposed to Australian prototype model railways - firstly through the Australian Model Railroad Magazine (as it was called at the time) which I first saw at the local model railway shop (Micro Models in Hornsby). Not long after, I made my first Australian model railway purchases - a couple of MRC and Friedmont kits bought from Casula Hobbies in Casula. Joe was so impressed that my dad had driven me all the way from Hornsby that he gave us a discount. Joe from Casula Hobbies remains a wonderful advocate for the hobby and a genuine trailblazer supporting Australian prototype model railways. In fact, I just took advantage of his Christmas special 5% discount - thanks again, Joe!

Locos and rollingstock from Mansfield Hobbies and AR Kits soon entered my collection and the focus on NSW railway modelling took hold. But it wasn't until many years later that I built my first permanent layout and managed to actually run most of the equipment purchased from the preceding years. It was the time when if you saw something you wanted come onto the market, you snapped it up before it was gone forever! It's fair to say that I have more than enough in the collection nowadays.

Since then we have had a tremendous explosion of local manufacturers bringing in detailed Australian model railway locomotives, passenger cars and rollingstock from China over the past 20+ years, as well as locally made products. These manufacturers are well represented in my collection, being from Trax/Powerline, Austrains, Auscision, Anton's Trains, Bergs Hobbies, BGB and BGM, Casula Hobbies, Eureka Models, IDR Models, Lloyds Model Railways, On Track Models, Southern Rail Models, SDS, Trainorama, and many more.

I still have that first Tri-ang train set as the photos show. It doesn't have much use other than to bring back some wonderful childhood memories. Thanks to my father and mother for introducing the hobby of model railways to me at Christmas time all those years ago.