I am finally getting around to reporting on the Modelling the Railways of South Australia Convention held in Adelaide a couple of weeks ago.

The R and Rx class of locomotives of the SAR
Motor body transport by rail in South Australia
The Penfield Branch Line
Working Mile End Yard in the 1970s
Bringing your own sound to the layout
Shared VR & SAR wagon design
Rob Burford's "Pirie" layout, emotionally described by Rodney Barrington

For those who don't know, Rob Burford died in October last year. His layout as described by Rodney certainly was the highlight of an exceptionally interesting day out.

While the prototype featured strongly this year, I find this information very fascinating; especially to someone like me more familiar with the railways of New South Wales and Victoria. There is always plenty to think about during the presentations on prototype practice.

The Convention notes were again superbly produced. The notes form the backbone (and much of the skeleton) of my knowledge about the South Australian and Commonwealth Railways.

The Convention also hosted a number of commercial outlets, including End of the Line Hobbies, Orient Express, OzRail Model Trains and Powerline. And speaking of Powerline, I have two Powerline 830 class mustard pot SAR locos for sale at $120 each if anyone is intersted. They are both in original boxes with original couplers. Test run only.

The first photo is an HO scale model railway station based on Mt Lofty near Adelaide. The model was made by Nick and Peter Michalak using a combination of materials including card, balsa, and styrene. 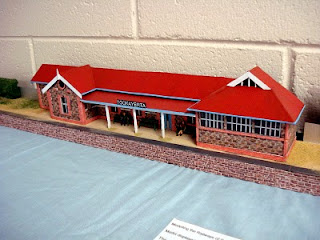 The next photo shows an ALX car carrier built from a Strath Hobbies kit (HO scale) by Paul Collins. 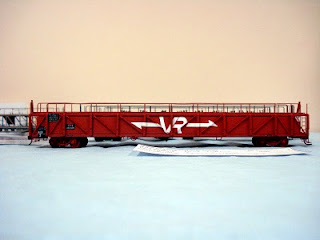 The third photo shows a beautiful model of a cement hopper built by Matthew Collins from a Strath Hobbies kit (HO scale). I really liked the look of this particular model. 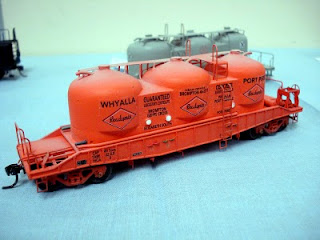 Finally, I again enjoyed catching up with friends and fellow modellers at the Convention. It was a great day, especially as part of a few days away to also enjoy the Barossa Valley and Clare Valley as well. Thoroughly recommended all round!
Posted by Brad H. at 18:28