I thought I'd better get this post out with some photos before the month runs out. I can't believe we are almost at the end of April. The year is just rocketing away.

This exhibition review will look at some of the layouts from the Forestville Exhibition (March) and the Canberra Model Rail Expo (April). I will just identify the layouts and provide some info about them. Not all the exhibited layouts are shown here. Nevertheless, there is good variety and something of interest in all of the layouts showcased in this report. You can click on the images to expand.

The highlight was the wonderful, and still not yet totally complete, Newcastle NSW 1899.  This N scale layout portrays the port of Newcastle (Australia) as it appeared circa 1899. Newcastle was, and remains, a major import/export port on Australia's east coast. All the models were built from scratch, including all the ships. The layout has been a ten year project by noted Australian modeller, Ross Balderson. The modelling is really superb. I hope we get the chance to see the layout again. 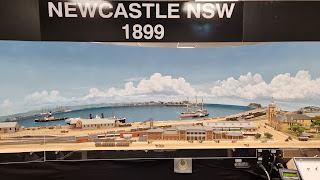 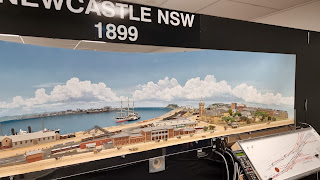 Goulburn (HO scale) is a NSW-prototype layout from the Guildford Model Railway Group. Goulburn is on the Main South Line between Sydney and Melbourne. As such, it sees plenty of railway action and the model railway is no different. The double track mainline on the model showcases much of the proprietary NSW and interstate locos and rollingstock from various Australian model manufacturers. 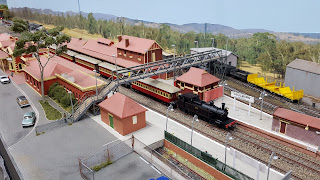 One of the largest model railway displays is that from the Coffs Harbour Model Railway Club. The layout is 12 metres long and just over 6 metres wide. This layout has been exhibited many times over the past ten years. It is a credit to the members that they bring this large layout to exhibitions so far from home, almost 800 km to Canberra for example. This HO scale layout is North American in nature but the club shows off an array of different model prototypes over the course of the weekend. The layout is walk-around DCC using NCE equipment. 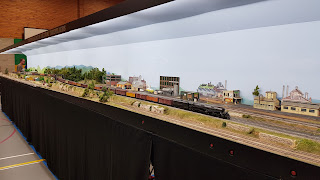 An old favourite is the HO scale layout, Yendys, from the ACT Model Railway Society. The location is fictitious but depicts an outer suburban station in Sydney. A defining feature of this layout is the running of suburban electrics under the overhead wires. Many varieties of locomotive hauling freight traffic are also part of the suburban scene. In the photo below we see a two car diesel railcar set passing the station on its forward journey. 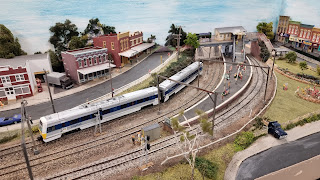 Another NSW prototype layout was Gunning. This N scale layout was recently featured in the April 2022 issue of the Australian Model Railway Magazine. Gunning is also on the Main South Line some 244km south of Sydney. It is a popular spot for railway photographers of the 1:1 scale. The layout includes some elements beyond the station precinct, including the water pumping station north of Gunning at Fish River and the much compressed turntable/roundhouse south of Gunning at Junee. The layout runs both steam and diesel hauled trains, some of which are commercially produced models of NSW prototypes from emerging N scale manufacturers. 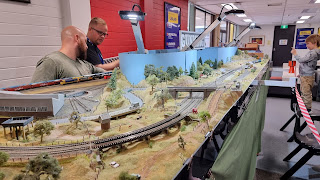 Gunbower is a real station in rural Victoria on the Cohuna branchline, 272 km north of the state capital, Melbourne. Gunbower, the layout, is an N scale layout using Tomix and Kato unitrack operated with digital command control. Many of the buildings were 3D drawn and printed and then cast in resin. 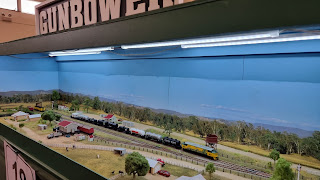 The Epping Model Railway Club attended both exhibitions with their large Bethungra Spiral layout (HO scale). The real Bethungra Spiral is a piece of historical railway engineering on the Main South Line between Sydney and Melbourne built to overcome difficult grades. The layout shows the line separation on the up (to Sydney) and down (away from Sydney) tracks to alleviate the grade. 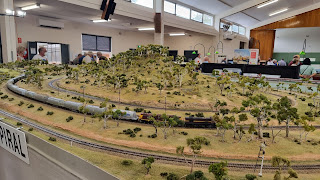 Dungog (HO scale) is another NSW prototype-based layout. This layout, from the North Shore Railway Modellers' Association in Sydney, has been around for many years and was up for sale at the Forestville Exhibition. Dungog is 80 km north of Newcastle (which is north of Sydney) on the Main North Coast Railway line. The layout is a very good representation of the prototype, especially the unique station building. Another unique feature on the layout is the layout lighting fixtures. The layout is operated with DCC and smart phone throttles. 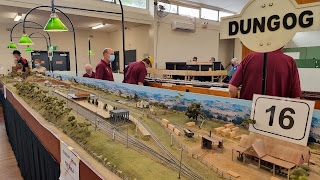 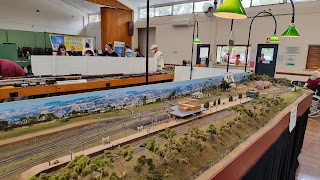 Mungo Scotts (HO scale) is another well travelled exhibition layout showcasing the Mungo Scotts flour mill situated on the Metropolitan goods line in inner-western Sydney. The flour mill ceased operation in 2009 and the site is now occupied by residential apartments. The layout is from the Sydney Model Railway Society, the oldest existing model railway club in Australia (established 1936). 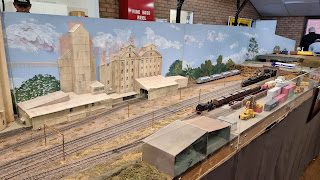 Narellan (O scale) is also a prototype-based NSW layout, this time on the outer Sydney branchline between Campbelltown and Camden. This line was famous for its milk traffic. The layout depicts operations from the mid-1950s to the line's closure in 1962. Turning to a couple of UK layouts, Tannochbrae is a fictional Scottish-themed layout in N scale based on the Western Highlands in the 1980s from the Sydney N Scale Model Railway Club. The layout was built to show that it is possible to produce a nice layout using set track (Tomix) and some imagination. The layout is DCC controlled. 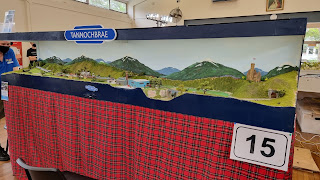 Another fictitious UK layout on show was Lyttleton (OO scale). This small layout was based on a preformed moulded starter layout from Bachmann with an added short extension (as seen in the photograph below) by the builder. With some scenery and ingenuity, this little layout also shows that starting out in the hobby does not need to be overly complicated or expensive. In fact, one family was so impressed that they bought the layout at the Canberra Model Rail Expo! 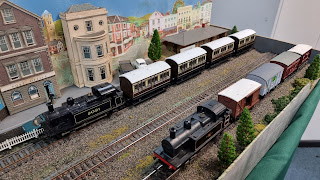 Staverleigh is a compact-sized layout (4mm scale) that demonstrates how a small layout can still be well designed and detailed. The layout uses an offsite fiddle yard to have trains enter and leave the layout. Staverleigh represents a fictional Great Western Railway branchline terminus, typical of the area around Ashburton in South Devon. Trains on the layout depict a range of locomotives and rollingstock in the years 1915-1947. 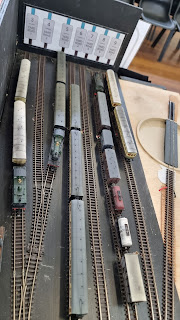 And finishing off this review, we look at the freelanced N scale Japanese-themed layout Senohikui Tetsudo. The layout was inspired by the owner's trip to Japan and the purchase of a number of B-Train shorty trains which then led to the idea and construction of the layout. B-Train shorty trains are trains that have been compressed longitudinally so they take up less space than a full-sized scale model. They are available as static kits but can be motorised, as this layout demonstrates. One of the features of Japanese urban model railways is the colourful and densely packed urban landscape. 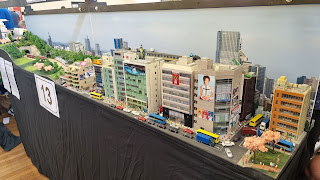 I hope this review and sample layout photos provides some inspiration for your own model railroading activities. There's a model railway theme, size, and standard for all of us.