The Caulfield exhibition - next instalment

Following on from last evening's blog post, I want to showcase a couple of overseas prototype layouts on display at the Caulfield exhibition last weekend. You will notice that I have not covered all the foreign prototype layouts - for example, Oakham (UK), Birkenstadt (German), Schoenblick (German) and the On30 scale timber railway Ashbyrne. I must also add that there was another Victorian prototype layout, Benalta, on display but the lighting was not conducive for taking pictures.

Of the foreign prototype layouts, I really liked Yardwork based on the prototype Wisconsin Central of the USA. Yardwork portrays a locomotive depot and yard lead tracks. There are a couple of industrial spurs for shunting purposes. The layout diagram on the control panel in the first photo shows the track configuration. Layout operation is by Digitrax DCC. 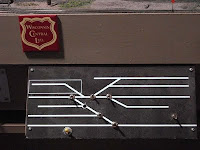 Yardwork is three metres in length with two short end extensions capable of housing a loco "offstage". When at home, the layout sits in a bedroom and therefore demonstrates that it is indeed possible to have an operating model railway in the house. The next image shows the right-hand side of the layout and the extension piece that takes a loco "offstage". 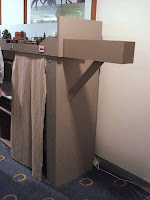 The next photo shows the full length of the layout looking down the yard from the right hand end. You can see the loco depot in the foreground and the lead yards further back. Industrial spurs for shunting are on the right. 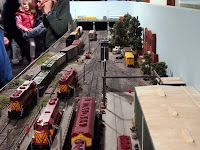 A good selection of Wisconsin Central motive power was on display, including this model of an EMD-built SD35 (No. 2500) by the sanding tower. 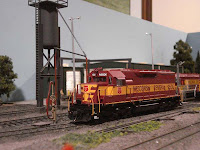 Another nice layout, but in N scale, was the Thompson River Canyon layout. This layout was based on the Canadian prototype. The layout displayed some excellent mountain scenery, including steep rocky terrain, snow sheds, and a number of bridges. The image below shows a Canadian Pacific train led by a Sd90/43mac loco (a Kato model I think) crossing one of these mountain bridges. 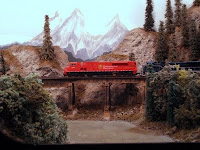 Phoenix Electric is a HO scale traction layout based on the Pacific Electric Railway of Los Angeles, California. The layout is the work of the Ballarat & District Model Railway Club. The layout featured an urban environment, something that is good to see given the number of rural-based settings most exhibition layouts portray. The street scenes, buildings, and industrial areas certainly portrayed the urban environment nicely. The layout put to good use plenty of the Walthers building kits to give the layout a strong urban feel. The photo below shows passengers about to board one of the red trolley buses for their morning commute to work. The layout control system used DCC from NCE.

The next layout I want to highlight from last weekend is the Somerset & Dorset Joint Railway (UK) prototype-based layout, Midsomer Norton. This layout is 4mm scale using 00 gauge track. The layout is set around 1950 and had a good period feel to it with a very well modelled station and yard area. The layout was built in the shape of a pentagon which is an unusual but effective method of layout display. A person could literally walk all around the layout looking at different scenes. The image below shows S&DJR 7F 2-8-0 No.53804 at the head of a coal train - note the lanterns and the three link couplings. 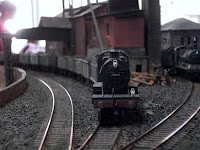 No doubt you can guess that I was most impressed by Yardwork. This layout exemplified to me what can be achieved within a relatively small amount of space and inside the home environment. Building and finishing a layout of this size is quite achievable and certainly allows for good detail and interesting operation using DCC and sound.

I must say that my plans for a US-prototype layout based on the Dakota, Minnesota & Eastern (DME) had it's preliminary thinking along similar lines to the Yardwork layout, albeit I still favour a traverser at each end rather than just an extended length of track for "offstage". My thinking on my planned US prototype layout is chronicled in my other model railway blog, DME Down Under.

The third instalment on the Caulfield exhibition in Armchair Modeller Down Under will feature some general comments and some more photos from the exhibition. Keep watching...
Posted by Brad H. at 19:34