The 37th annual Malkara Model Railway & Scale Model Exhibition was held today and yesterday in Canberra. The event is the Malkara School's major fundraiser and plays host to a range of model trains, boats and 'planes, as well as doll houses and other crafts.

I only had an hour on Saturday and a couple of hours on Sunday afternoon to get around the displays. After chatting with people (including Lloyd Sawyer from the now retired Lloyd's Model Railways) and buying a couple of things from The Model Railroad Craftsman, time was at a premium. I glanced at several exhibits but only spent time at displays of immediate interest to me. I took several quick shots with my "snappy" camera; a few being shown below.

The Epping Model Railway Club exhibited East Mateland and although a veteran of the exhibition circuit these days, was still voted by the public as the most popular layout of the show. 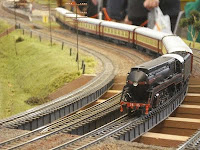 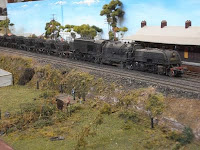 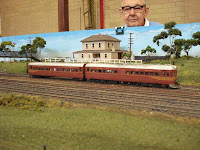 In the same room were two small but delightful layouts. The first was the HOn2.5 Duck Creek. This layout had some exceptional scenery, including a terrific saw mill with appropriate industrial sounds. Victorian Railways narrow gauge locos and rolling stock were nicely modelled. 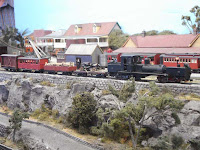 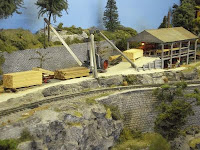 The other layout was a terminus station layout, Blagdon, showcasing the Wrington Vale Light Railway in the UK during the first quarter of the 20th century. The layout was about 12 feet long (approx. 4 metres) and is quite a nice length for this kind of layout. 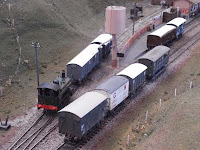 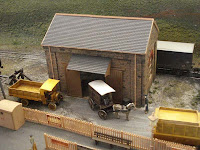 Canberra-based layout Willigobung was also on display. Willigobung is a real town name, although the layout is fictionally based on the Main South somewhere between Yass Junction and Cootamundra. This was the last photo of my day since the battery in the camera ran out! 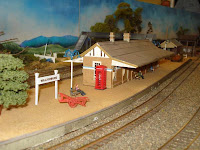 There were several other layouts exhibited (including Crestwood, Kelly River, Tarana, Yendys, and the Canberra NMRA club's US modular exhibition layout). However, the layout, L's PaPerGlen, was of special interest because of the central road and rail overbridge - a feature that I had not seen modelled previously. The roadway sits above the rail line on the bridge. 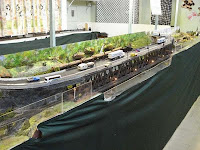 The Malkara event is not a specialist model railway exhibition. However, it is always popular with the public who come to support a good cause. And there is always the chance that the Malkara event might ignite an interest in hobbies and crafts with people who would probably not ordinarily come to a specialist hobby event - something to hope for.
Posted by Brad H. at 20:30