However, I have a few images here to show. The first image shows one side of the layout, Murri. This side features the station and yard while the other side is principally an open fiddleyard from where the trains are stored between runs. You can get a good view here as to how the layout is illuminated, using fluorescent globes mounted between boards attached to a metal frame. 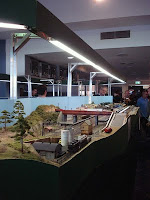 The next image shows End of the line - note the gap between the scenic boards in the middle towards the top of the photo where trains enter from a lead that turns ninety degrees to the left to a small stub-ended fiddleyard. This image shows the station area in the foreground and the sidings at the top right of the photo. 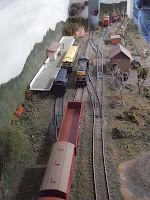 The next image is a full length shot of the HO scale US-inspired Yardwork layout. The layout as exhibited is the same as it is at home. Note the book-case like framing and the neutral colours. 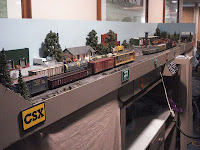 As I mentioned in yesterday's blog post, the operators of Bright/Everton operate the layout outside of the middle well and are indeed part of the spectators! The next image shows the operators on the Everton side of the layout. One thing I forgot to ask them was what headset communication system they were using to let operators on each side know when a train was coming. 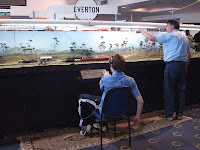 I also want to mention Duck Creek, a narrow gauge HO scale Victorian-inspired layout. Duck Creek had been exhibited in early August at the Malkara exhibition in Canberra. Because I'd seen it so recently, I didn't spend as much time looking at this layout as I did for others. However, it is a very nice and compact layout, worthy of a mention and a photo! 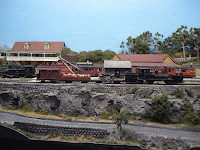 And to end off our journey to Caulfield, the dirt road rail crossing between Everton and Bright... 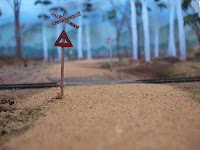 As one exhibition ends one weekend, another begins! This weekend (29-30 August) the Newcastle (Our Town) model railway exhibition is being held at Broadmeadow. I sure hope Bob takes his camera and gives us a report on his South Coast Rail blog! Until next time...
Posted by Brad H. at 21:35