I intend to blog each day this week about the AMRA Caulfield model railway exhibition from last weekend. This is because there is much to report. I need to upload the full set of photos onto Flickr and then use the Blogger slideshow widget to link to them. In the meantime, I will blog a few different posts to show a small selection of photos in each, and to keep the length of the posts down a bit.

This blog post looks at layouts based on the Victorian Railways. I may come back to them later in the week with some additional images. In the next post, however, I will show some photos of other layouts of different prototypes.

The first photo is of the layout Murranbilla. The layout is a single track generic station and yard set in south-eastern Australia. The cattle yard (pictured) and cement plant were nice features, as was the dry creek bed and trestle bridge at the other end of the layout. The painted backscene on this layout was particularly impressive. 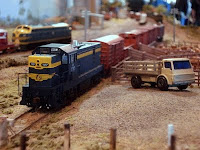 The next two photos are from the layout called Murri. Murri is another one of those generic prototype layouts also set somewhere is south-eastern Australia. The first shot shows a pair of SAR 930 class diesels hauling a fast goods service through the main station and yard.

The second photo shows a pair of T class diesels in post-Victorian Railways ownership - the lead loco being a CFCLA loco and the second being a Southern Shorthaul (SSR) loco. The pair are pulling a set of ballast hoppers out of the yard at the opposite end of the layout to the above shot. 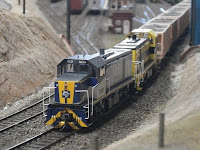 The next image is of a delightful VR layout, Bright/Everton. The layout design was in the traditional loop format, although the operators stood outside the middle well and operated the layout from the front on both sides. This certainly made the operators accessible to the public! The layout featured Bright on one side of the layout and Everton on the other. In the image here a Y class diesel is pulling a short goods train out of the loop at Everton. 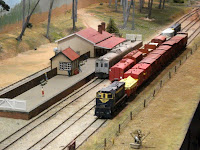 The last photo for this post this evening is from another excellent VR layout - the End of the line. The name says exactly what it means and shows a small terminus and yard of "a typical branchline terminus located on the Victorian Railways network" (so the program blurb says). I liked this layout a lot because it demonstrated what could be achieved in a layout length of a couple of metres. The gap between the backscene behind the station that was set further back than the backscene behind the yard to the right (to allow the entry of trains from a small fiddle yard) might not impress purists but I didn't let it detract from the overall display. The photo shows a nicely painted railmotor (a PSM brass or SEM kit ?) waiting at the station. 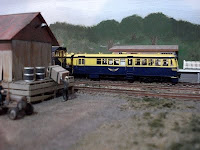 I thoroughly enjoyed these Victorian-based layouts and spent considerable time at all of them watching the trains roll by or seeing a range of different shunting movements.

My next blog post will have some more images from the Caulfield exhibition so stay tuned...
Posted by Brad H. at 19:48