Looking forward to Adelaide this weekend

I am looking forward to going to Adelaide this coming weekend. I will be attending the Modelling the Railways of South Australia Convention being held on Saturday at the Flinders Medical Centre.

I have been to several of these Conventions in Adelaide over the years and I have always enjoyed them immensely. The Modelling the Railways of South Australia Convention is full of information. There are presentations and a set of high quality notes that are produced each year. The notes are really a set of quality articles that support the presentations and form part of a reference library from previous Conventions. The notes are organised by subject headings and form individual inserts into ring binders. The articles are fully indexed and the current index of notes is now very comprehensive. I cannot recommend the Convention notes highly enough!

In addition, the Convention has a model display where models of locos, rollingstock, and buildings are showcased. In some years, a display layout is also exhibited.

The Convention last year featured a display layout and a diorama; both HOn3.5 and of excellent quality. In the first photo below you can see the display layout with Commonwealth Railways NM25 hauling a mixed goods train on the bridge over Wirreanda Creek. The actual prototype NM25 is preserved by the Pichi Richi Railway in Quorn, South Australia. 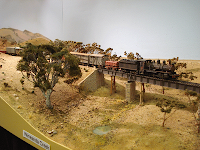 The next photo shows the diorama built by the Northern Modellers Group. The diorama featured some really terrific buildings. One of the builders of the diorama, Des McAuliffe (thanks for the correction, Iain), also gave an excellent presentation on model railway operations, illustrating his talk with video from his HO scale South Australian-prototype home layout. 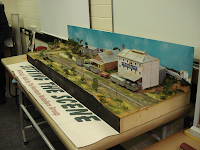 The last photo here shows the Criterion Hotel, a typical South Australian-looking pub. The model is in HO scale and is built from card. Interestingly, many of the buildings on display at the 2008 Convention and previous conventions have featured buildings made from card.

I am certainly looking forward to what I will hear and see at the 2009 Convention this Saturday. A report will follow upon my return home.
Posted by Brad H. at 21:35