Modelling the Railways of SA Convention is over for another year

I returned home to Canberra this afternoon after spending an enjoyable day yesterday at the Modelling the Railways of South Australia Convention in Adelaide. I think that the attendance at the convention this year would have been one of the biggest since the auditorium looked pretty full. Congratulations and thank you to Les Fordham and the team who put together another great convention and another set of quality notes.

One of the key features of the convention this year was signal cabins. Over here in NSW, we call them signal boxes. Anyway, David Goedecke gave a great presentation on Modelling South Australian Signal Cabins, including detailed prototype notes and photos; describing how he built a model of the cabin at Ambleside. What was especially interesting was how David became interested in signal cabins. David told us that when he was a young boy he came upon a book in the local library about the life of a signalman in England - "Signalman's morning" by Adrian Vaughan. After reading this book, David became fascinated with signal cabins and their operation. I can well understand from my own childhood experiences where interests in later life originally formed. Random childhood events often have enormous impact on our lives, albeit at the time, seemingly so innocuous!

Signal cabins were clearly of interest to other people as well since there were plenty of examples in the model display area, mostly in HO scale but at least one in N scale. I have included photos of just three examples showing HO scale models of Ambleside (Goedecke), Adelaide (Gavin Thrum), and Penfield (Vic Kollosuhe). 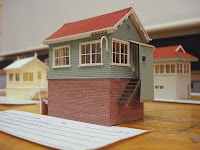 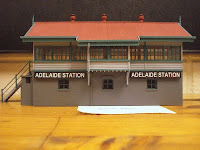 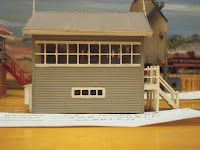 I also really enjoyed the presentation from Lindsay Baker about oil depots. Oil depots are a particular favourite of mine. It was good to hear first hand from Lindsay who had worked in the industry for many years for Golden Fleece. Lindsay also gave us an insight into how he has used oil depots on his HO scale layout - based on Naracoorte - called the South Eastern Division. Lindsay highlighted the different types of petroleum products carried and distributed by rail, as well as mentioning the diversity of customers that kept oil depots in business. In addition, Lindsay reminded us that oil depots were supposed to be securely fenced! The combination of prototype information and his description of how he uses oil depots on his superb home layout was a great way to showcase an effective and believable lineside industry. Lindsay modelled an oil depot for the display area and I have included a photo below. 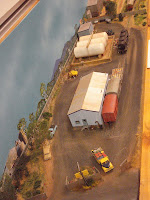 And speaking of the display area, there was plenty to see including signal cabins, SAR cabooses, locos and rollingstock. There was an even a small model of a Country Fire Association (CFA) shed and surrounding infrastructure. But possibly the pick of the display was Frank Kelly's superb model of SAR locomotive No.1 and train - photo below. 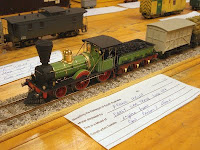 Other presentations from the day included early passenger cars of the Ghan by John Beckhaus, the 600 class steam engines of the SAR by Bob Burford, modelling SAR/VR joint stock Pullman passenger cars by Noel Potter and Stuart Hicks, SAR Webb cabooses in N scale by Mark Wilson, and photos of modern rollingstock by Noel Potter. The special guest speaker was Les Smith, ex-Australian National Chief Mechanical Engineer, who closed the day with a fabulous account of some of the goings-on during the AN period - sometimes fact is stranger than fiction!

Finally, in addition to the presentations, I really enjoyed catching up with people and meeting some new people (even a couple from Canberra) over the course of the day. All in all, it was another great convention and well worth the trip.
Posted by Brad H. at 21:03