I had an enjoyable operating session last night at the home of one of the local members of the Australasian Division of the NMRA. The layout is a fictional railway line located between North Geelong in Victoria and Eden on the far south coast of NSW. As a consequence, the line is standard gauge. The locos and rollingstock come from both the Victorian and NSW railways, as well as Freight Australia, Great Northern, R&H, and National Rail.

The layout is controlled using an older version of Easy DCC and works to a train order sequence. A card for each train gives instructions as to the origin and destination, and any operational requirements en route. For example, one of my trains last night was a goods train that had instructions to pick up and set out wagons at various locations along the way. Shunting in a number of yards and keeping to sequence was indeed quite a challenge, especially if through trains were waiting on me clearing the main to allow them uninterrupted passage.

There were about nine of us working these trains, including what the Americans would call yardmasters at the terminus points (North Geelong and Eden) and at the key crossing point (Latrobe Valley) midway between the two.

Operation was an interesting combination of radio control and staff exchange. This meant that one couldn't enter a new section of the railroad without permission (obtained through using the individual radio control handsets and microphones) and without getting the staff for that section. Upon leaving the section, the staff had to be returned. The photo below shows the staffs for the five key sections of the layout. You can see that there are two trains in operation by the fact that the staff for section B and section D are not in the box. 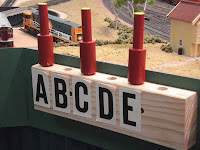 You can also see in the photo how the staffs are stored in a vertical position. The staffs sit in the box and actually operate a switch at the base of the wooden holders to indicate when a staff is in position in the wooden box or has been removed. The staff set-up also controls the signals to give the correct colour light signal for approaching trains. Very ingenious indeed!

I really enjoyed the operating night and using another type of digital control system. I am becoming more interested in using digital control every time I have the chance to experience a real operational model railroad, rather than simple loop layouts that are popular at model railway exhibitions. Operating a Victorian/NSW layout was also an interesting experience. It was certainly nice to see all those Austrains, Auscision and Trainorama locos and wagons in use.

Thanks to Rob and the other chaps for a really great evening!
Posted by Brad H. at 19:56