Out of the armchair

Today was a beautiful crisp and sunny day in Canberra. Yet it all started routinely enough. By mid-morning, I was well into the morning chores. A little later, I got a phone call from one my of train photography mates, Andrew (that's Andrew with an R.).  Andrew told me that a good "lash-up" was on its way south and that we should meet at his place and then drive to Gunning to take some photos.

It was a simple choice: continue with the morning chores or head off to Gunning for train photos.

No worries. We headed north out of Gunning and found a spot called "razorback" in the Cullerin Range (between top and bottom bridges for us "locals"). Dazza was already perched on one of those big granite tors and it wasn't long before we were joined by three or four other railway photographers.

We didn't have to wait long. The train with four locos and a long tail of empty grain hoppers snaked around the big, wide curve in perfect sunshine.  Kevin Schultz was at the reins of EL60 with a couple of T's (385 and 386) and VL 352 behind for extra horsepower. Good stuff!

Then we all raced back to our cars for the chase; back in the direction of Gunning and Yass. Andrew and I managed to arrive at the road overbridge at Gunning just as the train peeled around the curve and we took a few quick shots. We then took off for the Hume Highway and then drove just south of Jerrawa for the next shot, and then onto Binalong for this last shot. 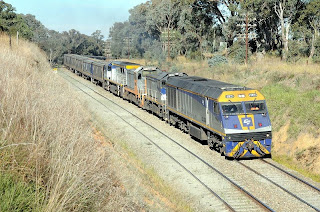 It was a great day to be out of the armchair and into the sunshine.
Posted by Brad H. at 22:48