On Saturday I visited the Hobsons Bay Model Railway Exhibition in Collingwood, Melbourne. I arrived at about 11am but there was still a good queue to get in, an hour after the doors were opened. The entrance fee for adults was $8.

There were two halls in which the layouts and commercial stands were situated. In the first hall, I felt a bit cramped as I waded through a crowd of people at the second-hand stall and towards the first layout I spied. This layout was called Leopold (HO scale) and featured a single track Victorian Railways line with a station and a yard. This layout was being exhibited by the Sunbury Model Railway Club. 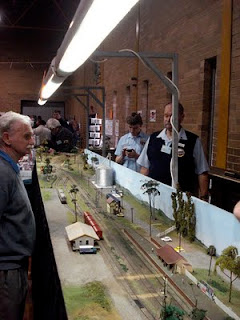 The layout next to Leopold was Tybrook, also in HO scale. Tybrook was a typical exhibition layout featuring a wide selection of Victorian prototypes from the 1940s through to the 1970s. Tybrook featured a station, goods yard, and engine facilities. In addition, Tybrook had a number of structures fitted with working lights. The other layout in this hall was the compact Leafy Bay. The rest of this hall was filled with commercial stands, including Alco World, ARHS Victorian Division, Broad Gauge Bodies,  IDR Castings from MicroModels Hobbyland, Lyndon's Basic Trains, Orient Express, Outback Model Company, SDS Models, Southern Rails, and Spirit Design. A demonstration of scratchbuilding and model making was also on show.

In the second hall were more layouts, including the excellent Korumburra from the Victorian Model Railway Society. A feature of this layout was the station and detailed yard infrastructure. A good selection of VR trains were in operation to keep the public entertained. 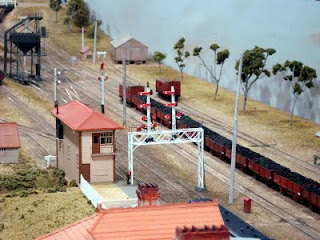 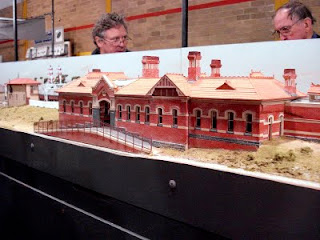 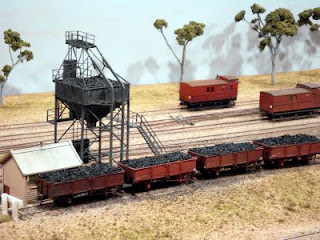 Victoria Bridge was another fine Victorian HO scale layout; with a curved station and extensive yard facilities, industrial sidings, and a loco depot. On the other side of this layout was a long bridge that was a great spot to watch the trains go by. I spent a good portion of my time looking at this layout. 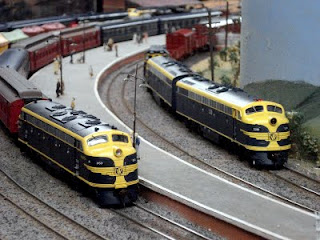 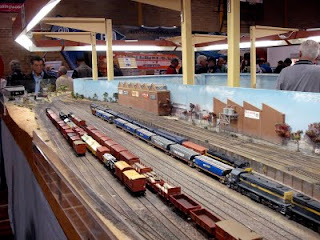 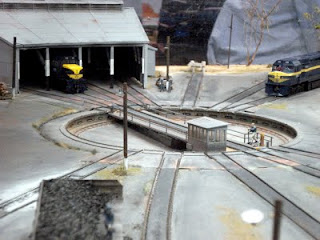 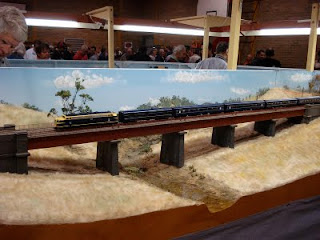 Nowa Nowa was a small VR N scale layout with fiddle yards at both ends. The fiddle yards used a traverser, popular among UK exhibition layouts. A photo of the layout and the traverser are below. 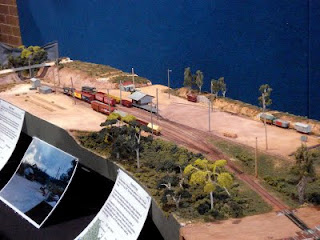 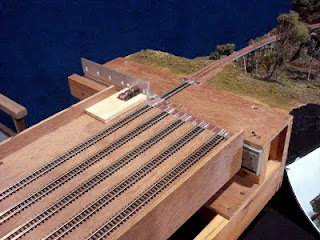 Fellow Canberra NMRA member, David Bromage, was also at the exhibition on Saturday and he has a nice selection of photos from the show - click here.

Lunch was available from the canteen, and the prices were very reasonable. A sausage sandwich and a can of Coca-Cola was $5. Some exhibitions charge inflated prices (often to cover professional catering costs) for food and drink but the Hobson Bay exhibition offered a good selection of food at fair prices.

Whilst I enjoyed the day, I thought that the exhibition had too higher a percentage of commerical outlets to layouts. One reason for this was probably because the organisers exhibit only Australian prototype layouts and perhaps there aren't a lot of quality VR/NSW/SAR layouts that the organisers could choose from.

I felt the exhibition was a tad one dimensional, even though I appreciate that the organisers want to showcase Australian prototype model railways. The layouts pretty much followed standard exhibition loop to fiddleyard, although both Leafy Bay and Nowa Nowa tried something different with traversers. Given that most of the layouts were running popular VR and NSWR locos and rollingstock in HO scale, I thought that there was an air of sameness about the exhibition that was a bit disappointing. Having examples of prototypes from other parts of the world would have provided a nice contrast to the Australian examples. However, I understand that other exhibition viewers may be more parochial than I am when it comes to model railway layouts at exhibitions, so this is only a personal viewpoint.

Nevertheless, I was happy to have made the trip to Melbourne to get a taste of some quality Victorian layouts on the local exhibition circuit.
Posted by Brad H. at 22:16