SCMRA seminar on way and works

[AMDU correspondent] I’m not sure how many of these seminars there have been, but they have been held annually for well over 10 years.  Each year the seminar has a theme and this year all of the topics covered related to NSW Way and Works wagons or departmental rollingstock.

It was a bit of a mystery as to who was going to tell us about what, however, this was cleared up on the morning with an agenda being provided when delegates were registered.  The presenters included Trevor Moore, Marcus Ammann, Ben Small and Alec Warner. The day was very capably chaired by John Parker.
The presenters covered almost every type of non-revenue vehicle operated by the railways from both a prototype and modelling perspective.  There was also a small display of models relevant to the theme.
About 60 people attended; mostly from Sydney but there were groups from Toowoomba and also from Canberra.  What was most noticeable about those who attended was the age distribution – there were very few young people in the audience.
The whole day was divided into 4 sessions broken up by morning and afternoon tea and lunch. The morning tended to focus on the prototype and all of the information was delivered by PowerPoint presentation and in a class room format.
The topics included:
·         departmental rollingstock (wagons for sleepers, shunter’s trucks, special loads vehicles, etc)
·         infrastructure for loco sand
·         weed killer trains
·          track inspection vehicles
·         breakdown trains (the vehicles that travelled with the cranes)
Some of the presenters confessed that they didn’t know much about their topic when they volunteered to present. However, they had spent the intervening 12 months researching their topic and commented on how rewarding that process had been.  The audience certainly recognised and appreciated their efforts.
A very enjoyable spit roast type lunch was provided, the majority of people being able to eat in a room similar to a mess hall.  After this, presentations discussed how some of the vehicles previously described had been or could be modelled.
It appeared that an intention of the day was to encourage people to do more modelling as the questions “Who is going to make one of these?” or “If we could get an XYZ part, who would be interested in making a such and such?” were asked.
And this is a nice segue to insert this photo of a lovely model of a Way and Works van modelled by Peter Street; a photo I took on his layout a couple of years ago (Brad).
. 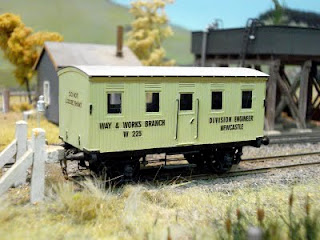 While the class room format worked really well for the prototype presentations it could achieve little more than raising an awareness of what could be kitbashed or what kits were available (or used to be available) to make particular vehicles.  This information is indeed important and useful, but it does not address the needs of those who feel they lack the confidence or skills to tackle some of the projects discussed.  Younger modellers need to develop confidence and modelling skills and perhaps this explains why so few of them were present (or perhaps if the focus is on younger modellers, the day needs to be planned and delivered for that audience context - Brad).
For next year’s seminar, attendees were asked to register their interest against a number of topics listed on a whiteboard.  The clear preferences were for railway structures and also for bridges and culverts.
The organisers and presenters are to be congratulated on their efforts. However, the organisers are encouraged to reconsider the format of the day if the objective is to provide people with the confidence and the range of skills needed to tackle some of the modelling projects discussed.
All in all, an enjoyable and very informative day.
Posted by Brad H. at 09:14