The Canberra Model Railway Expo is over for another year. A decent selection of layouts were on display covering a range of prototypes and scales, from N scale to G scale.

I managed to spend time at the exhibition on both Saturday and Sunday. A great part of the time at the exhibition was chatting with a bevy of railway modellers from interstate and from the local Canberra region. But I did get to see all the layouts too, including Geoff Small's new layout Oddwalls (following three photos). 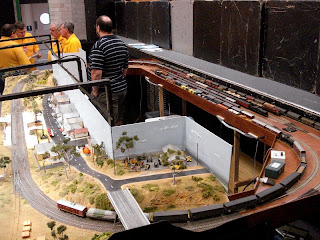 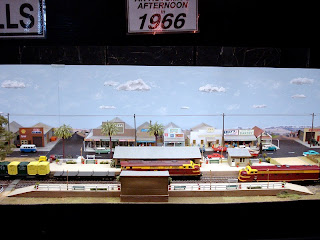 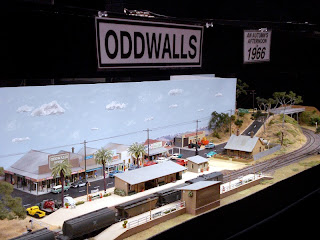 Oddwalls (HO scale) continues a fine tradition of exhibition layouts from Geoff (he has previously exhibited Mullet Creek, Smaldon Curve, and others). This layout is 4m long and uses the same fiddleyard as in previous layouts. Geoff uses a simple layout configuration (double main line with a couple of sidings) but demonstrates significant thought about landscape and townscape, quality detail, and very realistic scenic composition using a range of commercially available structure kits and accessories. Oddwalls was on its first showing and will be appreciated by fellow modellers when they get their chance to see the layout in the future.

Other layouts on display included:

Waterfall from the Illawarra Model Railway Association (HO scale) continues to impress as a quality NSW layout with fine attention to scenic detail. The trees at the rear of the layout look superb and this layout continues to improve at each outing. Spending time looking at the layout always reveals a fine example of railway modelling and chatting with the Illawarra blokes is always a pleasure. In the scene below, we see some NSWR diesels awaiting their call to duty. 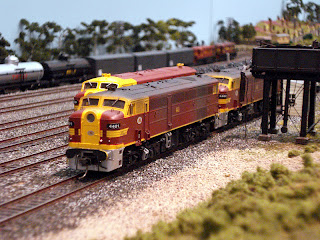 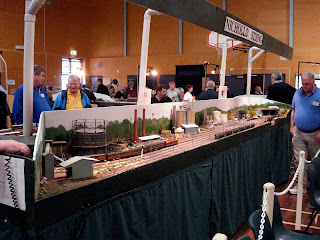 Jembaicumbene is another HO scale layout that features NSW railway prototypes. This layout has been around for several years now but still runs superbly. The feature of this layout is the curved station nestled within a busy town and industrial scene. In the photo below, we see a CPH railmotor just leaving the station. 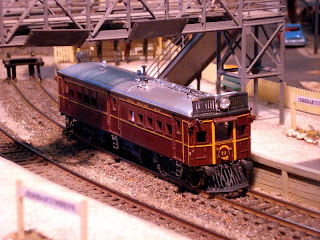 As way of contrast, the next photo shows an EL with a grain train speeding through Willigobung (HO scale). Willigobung is another layout that has been around for a few years now but I hear a new exhibition layout is currently under construction by the south Canberra lads. In the meantime, watching a parade of different trains snake around Willigobung was certainly enough to keep the punters happy. 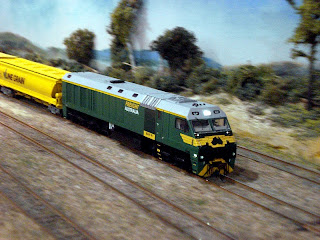 638 Mile is an Australian HO scale (NSW) based layout featuring a fictitious rural location. The layout shows a country branchline with a range of locomotives and rolling stock from the 1960-70s period. 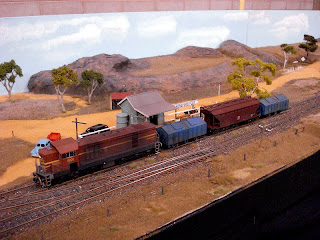 Another HO scale layout, but this time of US prototype, is Twelfth Street Yard. This layout from the ACT Model Railway Society uses DCC, but was originally operated using standard analogue control. Twelfth Street Yard has been on the exhibition circuit since 1999. It still holds plenty of interest with a variety of through trains, switching and interchange tracks, plus street running to a tight urban industrial precinct. The photo below shows some switching in action. 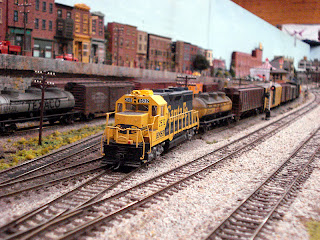 Enoshima (N scale) is a large and highly detailed Japanese layout featuring fast trains, high density living, and all the colour and light associated with big cities in Japan. Whilst I have scene this layout several times now, I always like to take in the density of detail this layout has to offer. 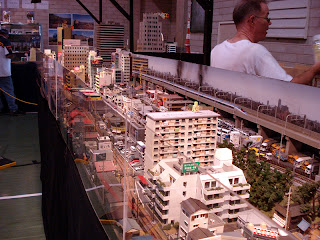 The Canberra Monaro N scale group displayed their large AusTrak layout featuring locos and rolling stock of prototypes from both Australia and overseas. AusTrak modules are individually built by members of the club. The standardisation of module design and construction means that these modules can easily be joined together into an operating layout. The station in the photo below is clearly a NSW prototype, albeit at the time I took this shot, long US modern era trains were having a run. 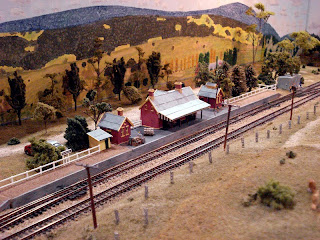 Representing OO (4mm) scale was Bridport South Western. I have seen this layout a few times now but I enjoy the audio commentary that this layout provides and the old world charm of its 1890 era. I also admire the trackwork and the use of a small traverser at one end of the layout to bring trains on and off the layout. 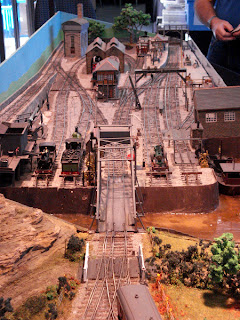 The larger G scale garden railway representative was Leonville Junction; always a great hit with the kids due to its fast action and multitude of cartoon and television characters scattered throughout the scenery. 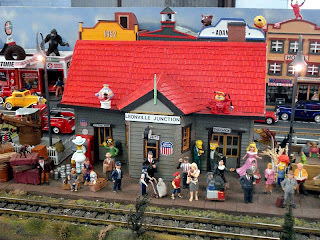 The exhibition was entertaining and a great opportunity to catch up with fellow railway modellers. The new layout Oddwalls was a highlight. Some other layouts were let down by poor lighting and I am not convinced that school venues are the most suitable for model railway exhibitions - a bit of a rabbit warren to some extent. Nevertheless, I understand that exhibition organisers have to use what venues are available and at a suitable cost. Also, good venues are difficult to find.

In addition, it does appear that new quality layouts coming onto the exhibition scene are the exception these days. I can understand why to some extent - new layouts take time and cost money so it's not easy to keep building new layouts. However, I do wonder whether recycling the same layouts each year will have any impact on future attendances. That said, I do know that there are a couple of new layouts under construction by modellers in Canberra that could debut next year at the 2012 Canberra Model Railway Expo - we'll have to wait and see if these layouts keep to timetable!

Thanks to the organisers for an enjoyable weekend and I do hope it was a success for you as well.
Posted by Brad H. at 23:07